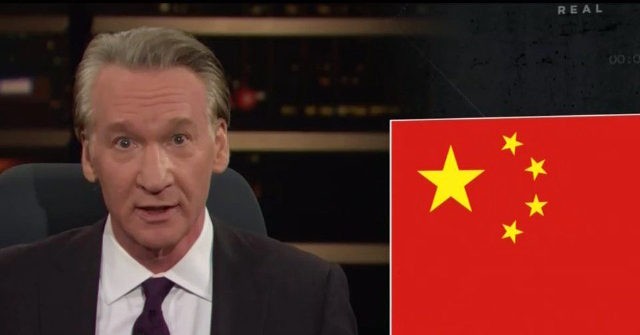 On Friday’s broadcast of HBO’s “Real Time,” host Bill Maher said that American companies and celebrities have taken China’s offer to be “a little evil” by agreeing to “shut up about the whole police state genocide thing” in exchange for access to the Chinese market and that when this happens, “you know you’re somebody’s bitch.”

Maher began by saying, “Now, if you’ve been like me over the past few weeks, glued to your TV watching the Olympics, that makes exactly two of us. We knew there were shithole countries, but who knew there was a shithole superpower? But I’m sure you’ve heard about American citizen Eileen Gu, the beautiful model, influencer, and now gold medal-winning skier who was born and raised here in America but who chose to ski in the Olympics for China. Cool, huh? Is it? Is that cool now, to choose to represent a totalitarian police state over America?”

After discussing China’s human rights abuses Maher stated, “America is not close to that, and it’s a cynical dodge to pretend that China’s sins should be overlooked because we all do it. No. In 1997, Britain returned Hong Kong to China with an agreement…from Beijing that Hong Kong could retain its free press, honest courts, and democratic government. Well, they lied. Democracy and freedom are being crushed there, and China doesn’t want anyone to talk about it. And because so much money is involved, no one does. Two years ago, when the General Manager of the Houston Rockets, Daryl Morey, tweeted, ‘fight for freedom, stand with Hong Kong.’ He was forced to apologize. In America, we’re supposed to root for democratic government, not apologize for it. But the NBA has a television deal with China worth a billion-and-a-half dollars. So, LeBron James said Morey needed to be ‘educated on the situation’. The situation being, I’ve got some shoes to sell. Kowtow is a Chinese word, but boy, Americans have gotten good at it. For years, Google proudly refused to kowtow to Chinese censors, adopting the slogan ‘don’t be evil.’ But the Chinese market proved so lucrative that, well okay, a little evil. That’s the deal China offers American companies and celebrities: We’ll give you access to our billion-plus consumers, as long as you shut up about the whole police state genocide thing.”

He continued, “John Cena took that deal. Well, come on, China accounts for 34% of global box office, and he’s a movie star now. So, like the Uyghurs, last year, he learned he needed to get some re-education. You see, John referred to Taiwan as a country, as if it was a separate country from China, which it is. But China would like to do to Taiwan what it did to Tibet and what it’s now doing to Hong Kong. So, we were treated to this video:”

After playing Cena’s apology, Maher remarked, “And I thought steroids shrunk your balls. Wowee, when a country can make your big, muscly, macho-man action stars grovel in their language, you know you’re somebody’s bitch.”