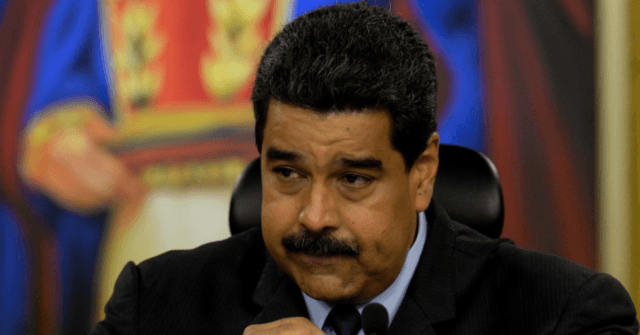 Venezuelan dictator Nicolás Maduro told Univisión’s Jorge Ramos in a recently recovered confiscated interview that people in New York and Miami eat garbage just as they do in Venezuela.

Maduro also berated Ramos for being “right-wing” and not doing enough to “defend Latinos” in the United States.

The interview, which took place in Caracas’ Miraflores palace in February, aired Sunday after a socialist regime insider smuggled it out of the country and back to its original owners. Maduro let the interview last for nearly 20 minutes before ending it, walking away, and ordering Ramos and his team of journalists arrested. Venezuelan officials ultimately released Ramos but took his cellular phone and footage of the interview.

In a teaser clip of the interview released last week, Maduro accused Ramos – a Mexican immigrant living in the United States and vocal critic of President Donald Trump – of being a member of the “right-wing opposition” and having a pro-American agenda. The full video reveals that Maduro also accused Ramos of insufficiently criticizing the United States government, lying about the existence of political prisoners in the country, and claiming non-governmental organizations (NGOs) like Human Rights Watch are imperialist tools to undermine the Bolivarian Revolution.

Ramos enters the interview with a confrontational question, asking Maduro how he would like Ramos to refer to him since he is not the legitimate head of state of Venezuela.

“I only have one name,” Maduro responds, adding that he “legitimately arrived” at the presidency “by the popular vote … even if your network may show us as a corralled minority.”

The opposition, Maduro railed, “has a serious identity problem because they only recognize election results when they win.”

When Ramos challenges this claim by citing proof of irregularities in nearly every election since Maduro took power, Maduro attacks Ramos personally.

“You have a position against the Bolivarian Revolution. I respect it, you’re a right-wing opposition member who lives in Miami,” Maduro tells Ramos. “You are not a journalist, you know that … accept your role as an opposition militant.”

Maduro then claims that he accepted to speak to Ramos “because I knew it would be like this” and equates him with alleged Venezuelans in the United States who want “an invasion.”

Ramos attempts to shift gears by identifying concrete objections Venezuelans have to Maduro being president.

“There are still millions of Venezuelans who do not see you as legitimate, first of all because of election fraud and, second, because of the murders they ascribe to you,” Ramos noted.

“It’s pretty grave of you to accuse me of murder,” Maduro replies.

Ramos then noted that former members of his regime, not Ramos himself, make those claims. He cited the example of Hugo Carvajal, the former chavista intelligence chief accused of torture and arrested in April on charges of attempting to traffic cocaine into the United States. Prior to his arrest, Carvajal called on the Venezuelan military to rebel against Maduro and supported legitimate President Juan Guaidó.

“The armed forces are not immune to the disastrous Venezuelan reality. They too find themselves without food, without medicine, without munitions and with most of their war equipment obsolete, cannibalized or with stolen parts,” Carvajal said in a video published in February.

“I fired him for bad conduct,” Maduro tells Ramos of Carvajal. “From one day to the next, Hugo Carvajal – who you guys accuse of being a torturer, a drug trafficker, pursued by U.S. law, has the credibility to accuse this laborer president of these barbarities?”

Maduro also accused former political prisoner Leopoldo López of being behind many of the dead civilians in protests between 2014 and today, nearly all of whom were killed by Venezuelans soldiers and some by the violent chavista gangs known as “colectivos.”

“Whoever is in prison in Venezuela was judged to have committed a crime, first and foremost Leopoldo López,” Maduro says. “He got due process, all the appeals … for grave crimes against the public that no country would allow. … Do you think a political leader has an open license to, because he is an opposition leader with the support of the U.S., to burn, kill?”

Maduro also claims there are “no prisoners because of their ideology,” a claim Ramos rejects by listing names and the number of actual political prisoners that Maduro currently has behind bars. “Take you little garbage home, compadre,” Maduro says as Ramos hands him a list of political prisoners and victims of repression.

As Ramos begins listing Maduro’s human rights abuses, including listing the names of those killed by his forces, Maduro rejects the statistics, accusing Human Rights Watch and the Venezuelan Penal Forum, an NGO that tracks prisoners of conscience in the country, of being tools of USAID to destabilize the country. Ramos persists, however, and Maduro begins to lose his patience.

“If you were Venezuelan, you’d have to face justice,” he tells Ramos.

The interview concludes when Ramos asks about the Venezuelans who eat garbage. Venezuela has largely run out of food, the product of the government nationalizing most of the nation’s agricultural land and giving it to socialist cronies who have no experience in growing food. Maduro gave the military full control of the nation’s food supply and implement a program called the “fatherland card” to ration the food. Venezuelans also get free food through the Local Committees for Supply Production (CLAPs), who use the food to manipulate civilians into supporting Maduro. Those who reject socialism are left without food. As a result, an estimated thousands of Venezuelans dig through garbage to find something to eat.

“Try to see your 40 million poor, try to defend Latinos there,” he tells Ramos.

When Ramos says he saw Venezuelans eating from the garbage in person while in Caracas, Maduro replies, “I saw it in New York,  I saw it in Miami.”

Maduro visited New York last September to attend the United Nations General Assembly. While U.S. sanctions prevent him from visiting the United States, the U.N. headquarters is considered neutral territory. It is not clear when Maduro would have seen any alleged people eating from the garbage in Miami.

Maduro ends the interview shortly after this discussion.

“This interview makes no sense for me or for you. It’s best to suspend it,” he tells Ramos as he gets up and leaves.

Maduro detained Ramos and his team following the interview, which Ramos later said surprised him despite the rampant violence against journalists under Maduro in the country. In a recent example, one of Maduro’s soldiers attempted to run a journalist over with an armored vehicle while covering protests in support of President Guaidó.

Maduro has not publicly responded to the broadcast of the interview by Univisión at press time.