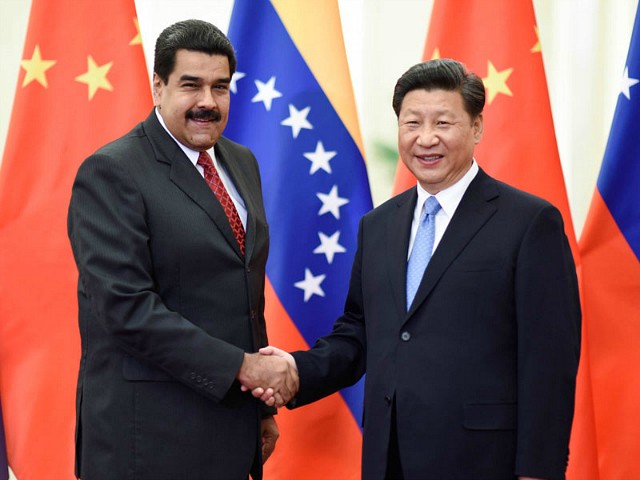 Venezuelan dictator Nicolás Maduro told the nation in a televised press conference Tuesday that the funds he secured from the Communist Party of China during a visit to Beijing last week were not economic aid – Venezuela will pay for that money with at least one million barrels of oil.

Maduro revealed the deal after he and Communist Party leader Xi Jinping revealed during his visit to China last week that the country would open a $5 million credit line to Venezuela, a much-needed influx of funding for the impoverished socialist state. The announcement triggered outrage among Venezuelans who feared that the deal would push the country deeper into debt as the International Monetary Fund (IMF) is predicting that inflation will hit 1,000,000 percent by the end of the year.

One million barrels of Venezuelan crude would sell for around $76 million at the daily basket price for Tuesday, September 18, far less than the amount China has promised to grant China. The discount suggests that either Venezuela is preparing to ship significantly more than that initial amount to China or that China is paying for more than oil with that credit line.

During his press conference Tuesday, Maduro took the time to promote China’s One Belt, One Road (OBOR) international infrastructure program, as well, which aims to give China near complete control of the world’s most important roads, ports, and railways. Xi Jinping thanked Maduro and Venezuela generally for its “understanding and support on issues concerning China’s core interests and major concerns” during the Beijing visit last week.

“We signed 28 agreements, which join over 700 projects in the realm of development that Venezuela maintains with the People’s Republic of China,” Maduro told the audience during his press conference, according to state media. As part of these agreements, following the completion of a plan for China to invest in Venezuela’s hydrocarbons sector, Venezuela will export one million barrels of oil to China. Maduro described the number as a “new goal” for Venezuela’s export industry.

Following his announcement, Maduro disparaged pro-democracy voices in Venezuela and the international community who expressed concern that China is seeking to take advantage of the weakened economic state Maduro has left the country in to impose itself on Latin America.

“China doesn’t lend us $15 billion and a debt exists … all the money China gives us for development projects in Venezuela … all that money was paid with oil and has not developed debts or a mortgage, it has developed development.”

Maduro went on to proclaim that Venezuela will now produce one million barrels of crude oil a day, thanks to investments from China.

Continuing his discussion on China, Maduro urged other Latin American countries to join the OBOR initiative.

“The Belt and Road Initiative is for shared development for the future of humanity,” Maduro insisted. “Nobody can compare it with any type of colonialism.”

OBOR has, in fact, become the target of widespread protests in Africa from residents who do compare it to colonialism, as the projects often require cooperating countries to take out loans they cannot pay at high interest rates, accept an influx of Chinese workers who destabilize the economy, and allow the Communist Party to take ownership of the projects when the nations inevitably default on their loans. In Kenya in particular, Chinese workers stand accused of segregating Kenyan and Chinese workers, keeping Kenyans from skilled jobs, printing instructions of construction projects only in Chinese, and forcing Kenyans to use separate and inferior eating and transport facilities from their Chinese coworkers.

Maduro did not mention these concerns during his remarks promoting OBOR. Instead, he suggested that the Community of Latin American and Caribbean States (CELAC) hold its next summit in China and consider buying into OBOR wholesale.

China appears to be attempting to reconstruct what became a frayed relationship with Venezuela in the past several years as Xi refused to patronize the collapse of the Venezuelan economy. China cut Venezuela off from further loans in 2016 and, a year later, a Chinese corporation sued the Venezuelan state oil company Petróleos de Venezuela (PDVSA) for failing to make payments on its debts.

As of last week, China is back to boasting of its close relationship with Caracas.

“It is undeniable that the presence of China in Venezuela is getting stronger every day, of which the US is skeptical for geopolitical reasons,” China’s state-run Global Times declared in a column last week.