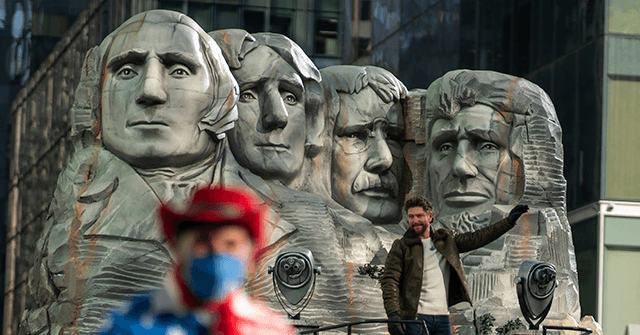 There were floats, there were balloons, there were Broadway musical numbers, there were crowds standing shoulder to shoulder; after a dismal 2020 showing, the Macy’s Thanksgiving Day Parade returned to its pre-pandemic glory Thursday morning.

“Spectators, shut out in 2020, lined the route again,” hailed the Associated Press. “High school and college marching bands from around the country were invited back to the lineup; most of last year’s performers were locally based to cut down on travel. The giant balloons, tethered to vehicles last year, got their costumed handlers back.”

Though the Thanksgiving Day Parade went forward as planned in 2020, the show was marked by a noticeable absence of cheering crowds, high school marching bands from around the country, and the 2.5-mile parade route. Here’s how NBC New York advertised the event at the time:

Although we are used to seeing the masses come together to see the grandiose balloons making their way down the Macy’s Thanksgiving Day Parade route, this year the celebration will be a bit different. The Macy’s Thanksgiving Parade will air nationwide as a television-only event with no audience on NBC and Telemundo on Thursday, Nov. 26 from 9 a.m. ET to 12 p.m. ET, in all time zones.

To safely bring the spectacle to millions nationwide during this unprecedented time, the annual production will be reimagined as a television-only event with no audience. This year the procession will forgo marching down the traditional 2.5-mile route in Manhattan in order to avoid gathering large crowds.

The parade’s iconic balloons will not be anchored by human handlers this year but will instead be pulled by specially-designed vehicles driving in precision.

In the days leading up to the Thanksgiving morning tradition, the parade organizers and New York City promised the show would return to its familiar format, with Mayor Bill de Blasio hailing it as a sign of the city’s rebirth.

“Last year was obviously symbolic. It wasn’t everything we would have liked to see in a parade, but they kept it going,” the mayor said Wednesday. “This year, the parade’s back at full strength.”

“It’s going to be a great sign of our rebirth,” he added.

The parade returning to its former glory did not, however, mean the coronavirus no longer loomed large over the event, as vaccinations and masks were required for parade staffers and volunteers.

“Parade staffers and volunteers must be vaccinated against COVID-19 and wear masks, though some singers and performers can shed them,” NPR noted. “There’s no inoculation requirement for spectators, but Macy’s is encouraging them to cover their faces. A popular pre-parade spectacle — the inflation of the giant balloons — was limited to vaccinated viewers.”

According to the Daily Mail, an estimated 2.5 million street spectators lined the parade route.