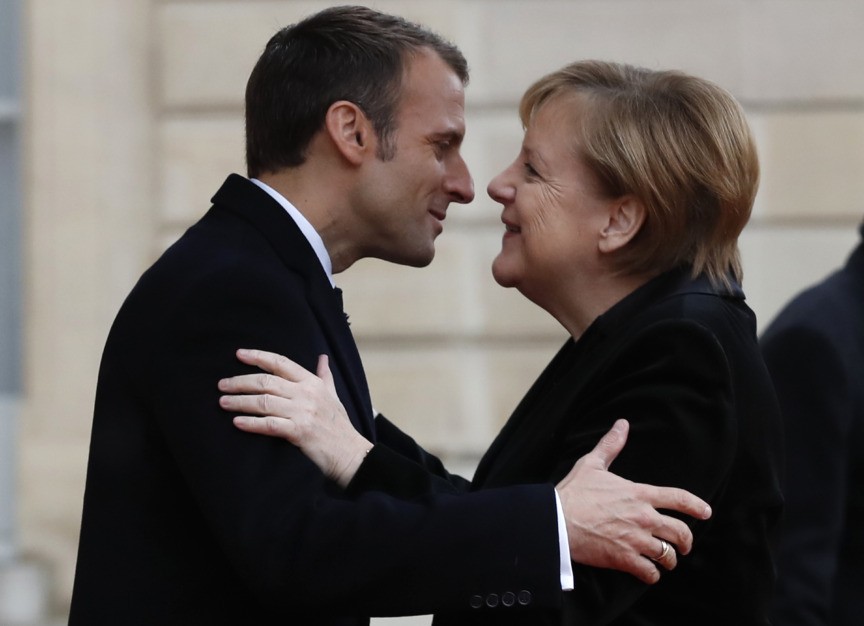 Berlin (AFP) – German Chancellor Angela Merkel and French President Emmanuel Macron were due to meet in Berlin Sunday in a show of unity against rising populism in the era of US President Donald Trump.

At their second meeting in a week, the two are expected to once again raise the idea of establishing a European army as a symbol of a united continent, a proposal that has raised Trump’s hackles.

Macron’s visit comes a week after world leaders met in Paris to commemorate the end of World War I a century ago and marks Germany’s Day of Mourning for victims of war and dictatorship.

After a wreath-laying ceremony, Macron was at 1230 GMT to address the German parliament — housed in the glass-domed Reichstag still bearing the scars of World War II — in the first speech by a French leader to the assembly in 18 years.

Macron and Merkel, who were to meet for talks from 1400 GMT, are both committed pro-Europeans who have resisted rising populist, eurosceptic, and anti-immigration forces in Europe, as well as Trump’s isolationist “America First” stance.

As the world has remembered World War I, which ended a century ago this month, Macron has repeatedly invoked its horrors to drive home the message that rising nationalism is again destabilising the world.

Macron and Merkel have proposed a European army that would operate within NATO — an idea Trump has mocked by tweeting that “it was Germany in World Wars One & Two – How did that work out for France?”

But German Defence Minister Ursula von der Leyen insisted Sunday that a joint military force would need not just common equipment and training but also “the political will to resolutely defend European interests when a conflict breaks out”.

And France’s Minister for European Affairs, Nathalie Loiseau, told the Journal du Dimanche: “it is not a question of being against the United States but of taking our destiny into our own hands to no longer count on others”.

While strong on symbolism, the Franco-German partnership and European reform push have been plagued by policy differences and the domestic troubles of the two leaders.

Since a Franco-German joint cabinet meeting on Europe in June, challenges have piled up with Brexit nearing and a budget conflict escalating between Brussels and Italy.

The Berlin talks also come at a time when both leaders are politically weakened, reducing the traditional driving power at the heart of the bloc.

As Trump gleefully tweeted days ago, Macron’s once stellar approval ratings have dropped off into the mid-twenties.

And Merkel, after 13 years in power, has in recent weeks announced the beginning of the end of her reign by declining to stand again as leader of her centre-right Christian Democrats (CDU).

She has vowed to serve out her fourth term, which runs until 2021, but many observers expect Merkel could be brought down earlier by infighting within the CDU or the unhappy three-party coalition she leads.

There is much frustration in Paris about Merkel’s perceived foot-dragging on Macron’s bold reform plans, especially on forging a eurozone with a major common budget and finance minister.

The two countries agreed Friday on the outlines of a proposed budget for the euro area, Macron’s flagship project to support investment, but not on the amount, which remains undefined.

Another area of contention is that Germany and France have so far failed to find a united strategy on EU efforts to introduce a digital tax on internet giants such as Google and Facebook.