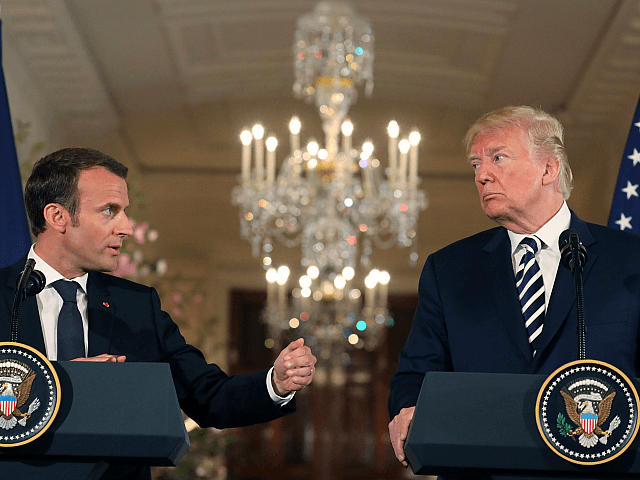 French President Emmanuel Macron has reiterated calls for a European Union army, this time saying that it is needed to protect the bloc from China, Russia, and even the United States.

The progressive leader, a proponent of greater EU federalisation which will result in the reduction in sovereignty for European nations, told Europe 1 Monday night that the bloc needs a “real European army”.

“We have to protect ourselves with respect to China, Russia and even the United States of America,” Macron said, according to Agence France-Presse.

“When I see President Trump announcing that he’s quitting a major disarmament treaty which was formed after the 1980s euro-missile crisis that hit Europe, who is the main victim? Europe and its security,” he said.

“We will not protect the Europeans unless we decide to have a true European army,” he said while on a tour of the former Western Front in Verdun, northeast France, to commemorate the centenary of World War One — a war in which some 116,000 Americans lost their lives defending Europe, including at the Second Battle of the Somme in 1918 which resulted in an Allied battle victory at the cost of 15,034 United States, and 5,600 British Empire lives .

“Faced with Russia, which is on our borders and has shown that it can be threatening, we must have a Europe that defends itself more alone without depending only on the United States,” the French head of state added.

In August, Macron called for defence divergence from the United States, then including current French foe Russia as those the centrist premier counted as possible European defence partners.

Last year, the European leader led the charge for a United States of Europe with a full monetary union and a single army, the EU making the first major step towards the latter in November after 23 member states signed the European Defence Union’s Permanent Structured Cooperation process (PESCO).

Macron has been building his international profile based on his opposition to the policies of U.S. President Donald Trump, seeking to forge a ‘European front’ against the American leader ahead of the G-7 Summit in June — with Trump schooling his fellow progressive world leaders on ‘America First’.

While at the United Nations in September, Macron, who has fallen to an all-time low of 21 per cent popularity in his home country, attempted to give a defence to globalism while criticising the pro-sovereignty, strong borders vision of President Trump’s America.