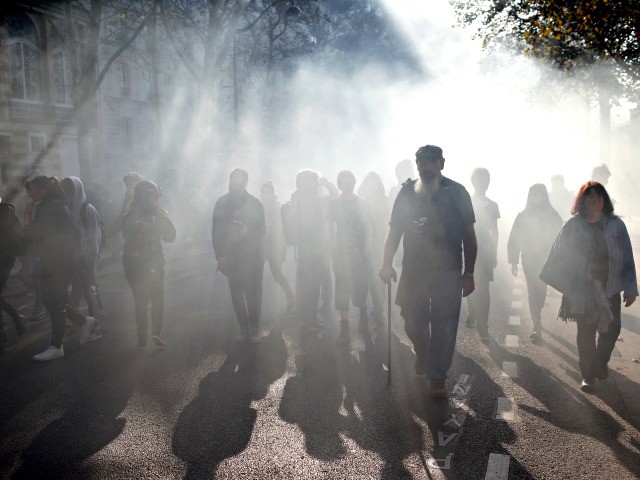 President Emmanuel Macron admitted Saturday that France is experiencing a “moral crisis” as “Yellow Jacket” protesters — a collective of working-class people across the political spectrum — have taken to the streets of Paris and other cities across the country to protest rising fuel taxes, with some demanding he resign.

The protesters’ discontent stems from diesel fuel tax hikes, which have increased seven euro cents per liter — nearly 30 cents per gallon — and will continue climbing in coming years, Transport Minister Elisabeth Borne said. The tax on gas will also increase four euro cents. Presently, gasoline costs around 1.64 euros a liter in Paris — $7.06 a gallon — which is slightly higher than the price of diesel. In a speech to French mayors regarding the protests, Macron refused to mention the “Yellow Jackets” by name and lamented the “demagogic fashion” in which the protesters were opposing the fuel tax hikes, citing it as evidence that France is in a “moral crisis.”

“It’s a little bit unfair,” Macron, per the New York Times, complained of the protests during a question-and-answer session with the country’s mayors during their annual convention. “They see my face when they fill up at the gas pump.”

“There is a moral crisis in society,” the French president later admitted. “The risk is in the ambient demagogy. I’m hearing the anger. But I don’t want to hear it in a demagogic fashion.”

“The challenge that is ours is to invent a new grammar,” Macron said at one point in his remarks.

According to the Times, none of Macron’s deputies have met with representatives of the “Yellow Jackets” and have offered what is described as meager financial “gestures” in the form of checks and rebates.  However, the protesters say the offers would do very little to nothing at all to help make ends meet.

The Times reports Macron’s response to the protests left them feeling “disappointment and bewilderment” at the giant annual French mayors’ convention in Paris this past week.

“The response has been out of step, disconnected,” Sony Clinquart, the mayor of Dunkirk, said.

Isabelle Henniquau, the mayor of a Swiss border town, said Macron “should explain what he is going to do” about the protests.

“There is a lack of intermediary between him and the population,” she added.

Meanwhile, thousands of police were deployed nationwide to contain the eighth day of demonstrations in which two people have been killed since they started the November 17 protests. Tense clashes on the Champs-Elysees saw police face off with protesters who burned plywood, wielded placards reading “Death to Taxes,” and upturned a large vehicle. There were no immediate reports of injuries, but 18 were detained for various acts including “throwing projectiles,” Paris police told the press.

“Some of the protesters were singing the national anthem, while others brandished placards demanding the resignation of Macron and calling him a ‘thief,’” reports Sky News.

Interior Minister Christophe Castaner said that 8,000 protesters flooded the Champs-Elysees at the demonstration’s peak, and there were nearly 106,000 protesters and 130 arrests in total nationwide. Castaner denounced protesters from the far-right whom he called “rebellious,” as he accused National Assembly leader Marine Le Pen of encouraging them.

Macron has so far held strong and insisted the fuel tax rises are a necessary pain to reduce France’s dependence on fossil fuels and fund renewable energy investments — a cornerstone of his reforms for the nation. He will defend fresh plans to make the “energy transition” easier next week.