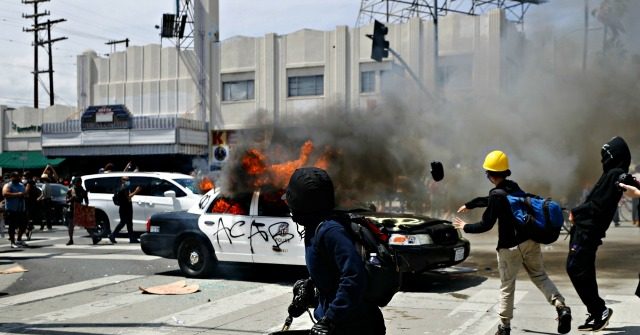 Los Angeles saw riots spread to the Fairfax District and Beverly Hills on Saturday in what is shaping up to be another tumultuous night in the nation’s second largest city.

The riots follow a night of protests and looting in downtown L.A., where thousands gathered to air their grievances over the death earlier this week of George Floyd in Minneapolis. L.A. city officials have set a curfew to take effect at  8 p.m., impacting most of the downtown L.A. area.

“Violators are subject to arrest,” the L.A. Police Department said in announcing the curfew.

CURFEW in Downtown LA tonight. No one is allowed in public or on the streets.

In a press conference on Saturday, L.A. Mayor Eric Garcetti urged people to stop looting and setting fires, while also pledging to protect people’s right to peacefully protest. “We will always protect free speech and Angelenos’ right to live without fear of violence or vandalism,” he said.

We will always protect free speech and Angelenos’ right to live without fear of violence or vandalism. To increase safety for demonstrators, law enforcement and all citizens of Los Angeles, we are putting a curfew in place from 8 p.m. to 5 a.m.
https://t.co/vy3XM760qb

The LAPD warned the public that “large and violent” protests were underway Saturday afternoon in the Fairfax district, near the popular Grove outdoor shopping mall.

“Large and violent protest occurring in the area of Beverly Blvd and Fairfax Ave. Do not endanger yourself and your loved ones. Stay away from the area. Large amount of protestors and police presence,” the LAPD said.

Large and violent protest occurring in the area of Beverly Blvd and Fairfax Ave. Do not endanger yourself and your loved ones.

Stay away from the area. Large amount of protestors and police presence.

Reports said that thousands of protesters marched through the Fairfax district, beginning Saturday afternoon at Pan Pacific Park, and then heading west on Third Street. Several police cars were reportedly vandalized and two were set ablaze while some people climbed onto buildings and a commuter bus.

A police car was in flames in Central L.A. as protests continued Saturdayhttps://t.co/4CEtKhwZCr pic.twitter.com/v4fpCMZHlA

In Beverly Hills, protestors congregated in areas including the Beverly Center shopping mall, and Rodeo Drive, with some people chanting “eat the rich,” according to video posted to social media.

Some of the high-end shops on Rodeo Drive were boarded up on Saturday afternoon.

The city of West Hollywood announced that it will likely impose an 8 p.m. curfew, citing protests around the county.

The City and @WHDLASD are aware of and monitoring the protest events taking place today. In an overabundance of caution, the City will likely enforce an 8PM curfew this evening. More details to come. Please follow @wehocity for the latest information. #WeHo

L.A. is still reeling from yesterday’s riots in downtown that saw hundreds of arrests as protestors blocked intersections and parts of the 110 freeway, while looters destroyed windows and stole merchandise from stores. Six LAPD officers reportedly sustained non-life threatening injuries in confrontations with rioters.