A local newspaper serving the Borough of Camden in London has alleged they were blocked from covering a visit by the Prime Minister to their neighborhood, with a member of staff reportedly threatening that they were “jepoardising” their access to information by turning up to the event.

The Camden New Journal claims the Prime Minister was driven to a carefully “stage managed” event at a north London medical centre on Thursday and was kept away from local media because, they allege, her media staff were isolating her from potentially difficult, unvetted questions from the press.

We were warned not to ‘jeopardise’ being given exclusive words (a statement sent later) by turning up to Theresa May’s visit to our patch https://t.co/yWffqhjlCp

Instead of actually being present at the event, the newspaper is claimed to have been told their journalists would be given official photographs to use and exclusive quotes, to give the impression they had actually been able to ask the Prime Minister questions in person — but with the obvious advantage of the Prime Minister’s press office having carefully vetted all the answers before sending them out in writing.

The newspaper even claimed their photographer was prevented from setting foot on the National Health Service (NHS) run facility — a public building — while the Prime Minister was taken to a different door to the one they had been told to expect so she could avoid the cameras.

At one point, the reporter was told: “You don’t want to jeopardise your exclusive words.”

The bizarre exchange continued as the New Journal asked what these words would be about, to which an official replied: “I don’t know, but they are just for you.” The reporter who waited on pavement outside was later asked: “Still here?”

Political leaders from all parties are wary of questions from local newspapers, which in some cases do not follow the familiar script used by political reporters, often described as operating within the “Westminster bubble”.

The allegations come just a day after Scottish newspaper The National ran a blank front page in protest at the Prime Minister’s press team denying them access to a media event in Scotland. The combative paper — which could have been counted on to ask the Prime Minister difficult questions if they were in the room — said of the exclusion:

“It’s the second time in as many weeks that our reporters have been denied a chance to hold top Tory government officials to account. Two weeks ago we were the only national Scottish newspaper denied a chance to question May’s de-facto deputy David Lidington.” 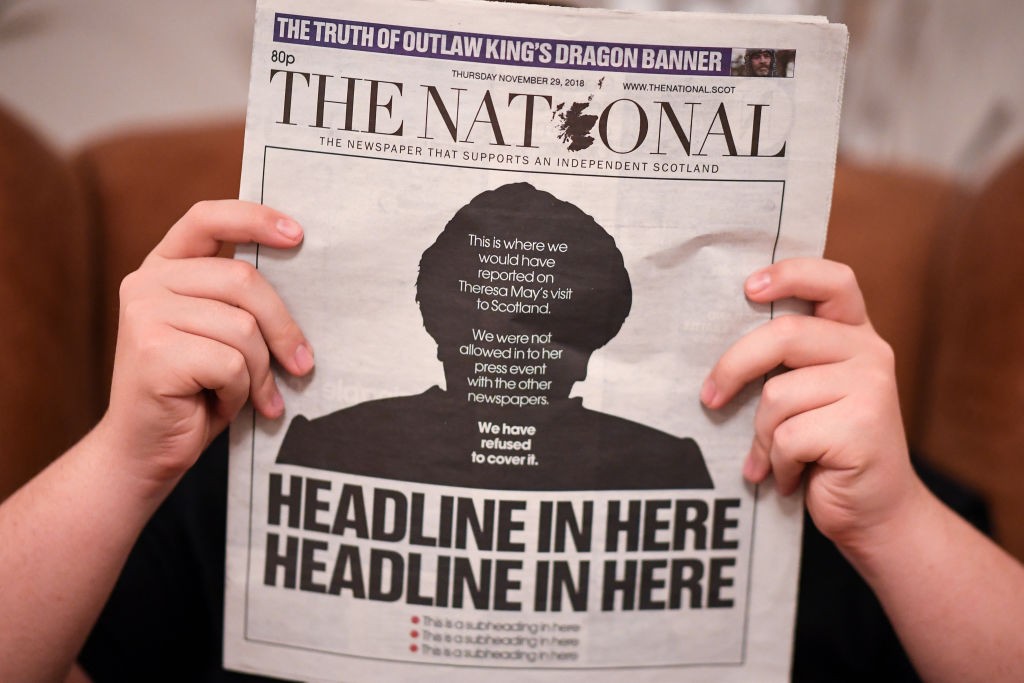 GLASGOW, SCOTLAND – NOVEMBER 29: A member of the public poses with the Scottish newspaper The National, which has a circulation of under ten thousand copies, which has run a blank front page this morning in protest at not being allowed access to the closed media opportunity with the Prime Minister on her visit to Scotland yesterday, on November 29, 2018 in Glasgow, Scotland. Theresa May is travelling around the UK in an attempt to garner support for her Brexit agreement ahead of next week’s House of Commons vote. (Photo by Jeff J Mitchell/Getty Images)

Breitbart London has approached the Prime Minister’s team for comment.

The visit to the health centre by the Prime Minister came as she was on an intensive two week media blitz, working to sell her “worst ever deal” Brexit plan to the public before having it voted upon by Parliament in December.

The charm offensive, which so far has included toe-curling claims of certain economic ruin for the United Kingdom if it does not fall in line with the Prime Minister’s plan, will culminate with a televised debate between Theresa May, who supported the Remain campaign int he 2016 referendum, and Labour leader Jeremy Corbyn, who also supported the Remain campaign in the 2016 referendum.