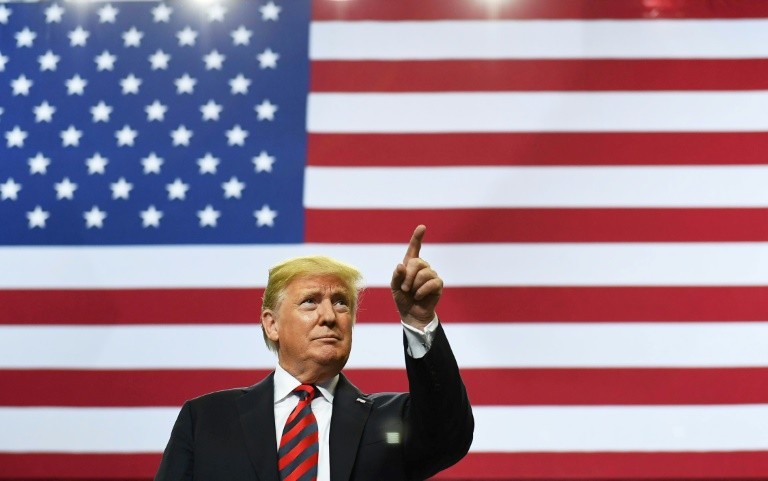 President Donald Trump will hold a campaign rally in Ohio on Friday evening, a day after his blockbuster White House meeting with Kanye West and NFL legend Jim Brown.

Trump, who has been on a campaign and media blitz, will travel to Kentucky on Saturday evening for another rally as he barnstorms across the country to boost Republican candidates in key congressional races.

7:22 PM: Trump praises Ohio’s Jane Timken… and gives credit where it’s due by praising Bob Paduchik. He also has kind words for Sen. Rob Portman (R-OH). He now speaks about Mike DeWine and how they are running against Elizabeth Warren’s “far-left disciple, Richard Cordray.”

7:19 PM: Trump says if Pelosi and Democrats take over, they will raise taxes, impose socialism, take away jobs, erase borders, and let drugs and crime “pour into this country.”

Trump claims even the fake news media are not challenging him when he says “Democrats are the party of crime.”

7:15 PM: Trump talks about working two summers in Swifton Village and his love of the Queen City and traveling to Kentucky.

Trump talks about getting Ohio in election night. “We got it,” Trump says.

“We are more energized as Republicans than ever before,” Trump says.

He says Republicans are winning in Senate races after Kavanaugh because “people are realizing how important the Supreme Court is.” Trump talks about potential 3-4 more replacements.

Trump says from the moment Kavanaugh was announced, the angry mob was on a mission to demolish and destroy him. Trump says the left were saying horrible things even before they knew who Trump was going to pick.

“These are bad people. We can’t let this happen to our country,” Trump says. “Republicans believe in the rule of law… not the rule of the mob.”

Trump says Democrats are going so far to the left that Pocahontas is becoming “mainstream.”

7:12 PM: Trump now says “our magnificent First Lady Melania just returned from a successful trip from Africa.” Trump says Melania told him it’s both “beautiful and sad” and “it’s got every kind of emotion… it opens your eyes about what goes on in the world.”

7:10 PM: Trump says “steel was a dead business” when he came into office and now steel plants are opening up all over the place.

Trump says it’s not going to be “mud” or “sand” steel before saying the steel that was dumped was nothing but “garbage.”

“We don’t need outsiders telling us about our steel industry,” Trump says. “After  years of rebuilding foreign nations, we are rebuilding our nation, which is what we want.”

7:06 PM: Trump speaks about the phenomena called “America First.” “It’s about time,” Trump says before saying the unemployment rate is at a 50-year low. The crowd boos when Trump mentions that the Obama administration said that manufacturing jobs are “dead” and “gone” and a “magic wand” would be needed to bring them back.

“I guess we have the magic wand,” Trump says. “They wall want to be where the action is.”

Trump says the U.S. is now the “hottest country in the world” and that’s why jobs are coming back in… as the crowd chants “USA! USA!”

7:04 PM: Trump says every American’s heart is with those impacted by Hurricane Michael. Trump says the hurricane was “vicious” and “devastating.”

7:02 PM: Trump tells Ohioans that “under American leadership, America is being respected again!”

Trump says he is proud to report that U.S. secured the release of pastor Andrew Brunson from Turkey. Trump Brunson is in the air and will head to Germany for a brief check-up before coming to Washington, DC, tomorrow.

“He went through a lot. But he’s on his way back,” Trump says.

7:00 PM: Trump getting ready to address another packed crowd.

Here in Ohio, after someone instigated a “Kavanaugh” chant, the crowd followed it up with a chant of “We like beer”

At the airport, Pres doing a fundraiser for the re-election of GOP @RepSteveChabot, facing a challenge from Democrat @AftabPureval. Pres was looking for Chabot to join him greeting a crowd at the airport, but couldn’t find him. “Where the hell is he,” @POTUS was heard to say. pic.twitter.com/M4XIPH95Ze

Trump supporters line the streets of Lebanon waiting to enter the Warren County Fairgrounds ahead of tonight’s rally scheduled to begin at 7 p.m. pic.twitter.com/ttlz98uGAS

The Crowd here at the @POTUS #MAGA Rally. @Enquirer pic.twitter.com/x6PuSuBQxg