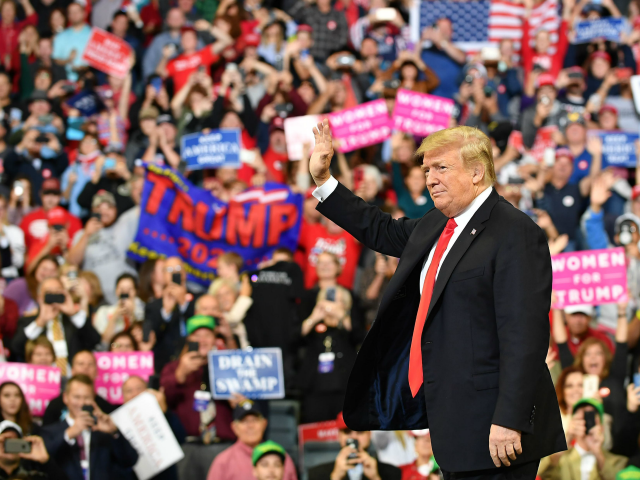 Trump says to be successful in life, “you have to believe” what you are saying. Trump says he has known a lot of Democrats who approved the wall in 2006 and have gone so far to the left since.

“Oh boy, they’re going to be reporting about you tonight,” Trump tells the crowd.

Mentions “Crooked Hillary,” which prompts chants of “Lock her up”. @POTUS then exclaims: “Oh boy, they’re going to be reporting about you tonight.” pic.twitter.com/l31RghSyLx

7:33 PM: Trump says Democrats want caravan after caravan to come to the country and “want to sign them up for free health care, free welfare, free education, and for the right to vote.”

Trump asks: “What’s that all about?”

Trump says he wishes illegal immigrants would be “activists” in their own countries instead of taking over some city councils in California.

7:31 PM: Trump says the “fake news” did not give him “much ink” when he proposed a plan to get prescription drug prices “tumbling down.”

“The middlemen are not thrilled with me right now,” Trump says.

7:29 PM: Crowd boos when Trump asks if they want Nancy Pelosi to be the next Speaker. He says radical Democrats will try to “erase every single thing that we’ve achieved.” He says Democrats want to raise taxes, impose socialism, take away the second amendment, and take away the strong health care that Republicans are making stronger.

7:27 PM: Trump again says he is a nationalist and not a globalists and mocks his critics for saying he was so wrong to say that.

“I’m for us,” Trump says. “We’re going to help the globe, but we have to help ourselves as well.”

Trump says it’s “so unfair” what has been happening to the United States.

7:23 PM: Trump speaks about the negative press coverage even when he does something good. He says, speaking of North Korea, the country would have ended up in a World War had he not been in office. Trump says America has “all of the cards” because everybody wants to rip the country off and rips Fox News’ Bret Baier for not accurately reporting on his meeting with Vladimir Putin. Trump says it’s important the media correctly report his results.

“If I wasn’t here, you would have ended up in a World War,” ⁦@realDonaldTrump⁩ says. pic.twitter.com/vG4mNJOxwG

7:22 PM: Trump calls his MAGA supporters some of the “most honest, most wonderful, principled, hard-working, patriotic people on the face of God’s earth.”

“Nor do we blame the Democrat Party every time radical leftists seize and destroy public property and unleash violence and mayhem. Yet the media has tried to attack the incredible Americans who support our movement to give power back to the people,” Trump says pic.twitter.com/ymp5xmVyJc

7:18 PM: Trump tells the crowd the the “suspect has been captured” and “is now in federal custody.” Trump says “these terrorist acts” must be prosecuted to the fullest extent of the law. He thanks the FBI and law enforcement for finding a “needle in a haystack.”

“These terrorist actions must be punished and prosecuted to the fullest extent of the law,” Trump says at a rally in North Carolina, referring to the string of mail bombs intercepted this week pic.twitter.com/5ccKfUjoKN

“Everyone will benefit if we can end the politics of personal destruction,” Trump says. “We must unify the nation in peace, love, and harmony.”

Trump says the “media has a major role to play–whether they want to or not.”

Trump says the media have a major role to play when it comes to tone and everything.

“The media’s constant unfair coverage, deep hostility, and negative attacks… only serve to drive people apart and undermine healthy debate,” Trump says. He says “we have seen an effort by the media” to use the “sinister acts by one individuals to score political points against me and the Republican Party.”

Trump says he and Republicans did not do the same to Democrats when a crazed Bernie Sanders supporter tried to slaughter Congressional Republicans and almost murdered House Majority Whip Steve Scalise (R-LA).

7:15 PM: Trump takes the stage. He says he has never seen it rain this much in North Carolina. He thanks his friends in the crowd for being with him before he even started running for president. Trump says he can’t wait to be back in Charlotte for the 2020 Republican National Convention.

6:55 PM: CNN’s Brian Stelter says that those attending the rally believe that the “CNN sucks” chants are like “theatre” and “pro wrestling” and are “in on it.” Then, Stelter ominously says “not everybody feels that way” and “not everybody is joking around.” He wonders if Trump will be able to “control the forces he has unleashed” and is able or willing to “tamp down the fire he has started.”

President Trump is in Charlotte. pic.twitter.com/R2Acm0ih4p

This is the second “CNN sucks” crowd chant this evening at the Bojangles Coliseum, before President Trump has landed here in Charlotte pic.twitter.com/1Y1sKvQh0B

They’re at the Trump rally in Charlotte today. pic.twitter.com/bni9eVg7GF

Despite the cold, wet weather, there are A LOT of Trump supporters lined up to see him speak tonight in Charlotte #Trumprallycharlotte pic.twitter.com/RdDO4mh3wq

We are LIVE AT 5 outside Bojangles Coleisum where folks are still trickling in for Present Trump’s rally… and leaving their umbrellas at the door. Event kicks off at 7PM @FOX46News pic.twitter.com/OdbcCE5PPx

At that point, these supporters will have waited more than 27 hours to hear him speak.

They’ve camped out in the cold rain all night and say they’d weather a hurricane to support him. @wsoctv pic.twitter.com/EUTXq7puEL

Here at Bojangles Coliseum for the “Make America Great Again” Rally here in Charlotte. I may not agree with President Trump, but it may be my only opportunity to see a sitting POTUS. pic.twitter.com/55yaDZIxJB

At Trump rally, Bill Williamson of Charlotte offers a thumbs up — and more — for the president’s, um, bashing of CNN. #ncpol ⁦@theobserver⁩ pic.twitter.com/s2QlNrSMXl

One of my 2016 media coverage regrets: I never went to a Trump rally. So this fall I planned on attending one. In this thread, I’ll share some of my observations from Charlotte pic.twitter.com/3fVQTKJUiq

The Trump campaign is paying the city of Charlotte $33,800 to hold a rally at Bojangles Coliseum tonight for Mark Harris.

Here are the details from the contract between the president’s team and the city: @wsoctv pic.twitter.com/kDbdBw8nsu

People are camping outside Bojangles Coliseum as they wait for President Trump to arrive in Charlotte.

Some of these supporters have already been here for 17 hours.