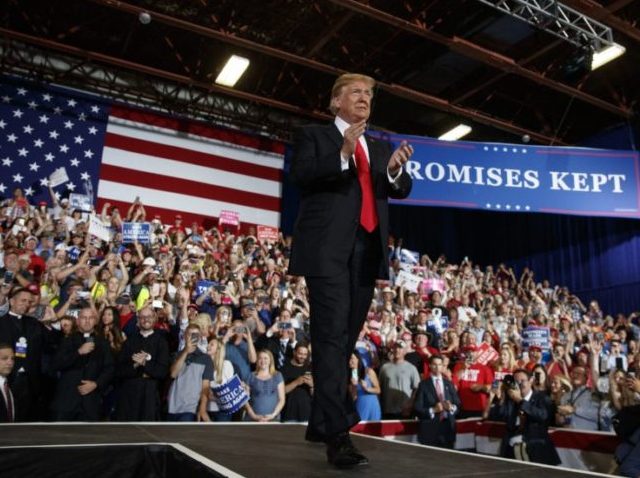 President Donald Trump will hold a Thursday evening campaign rally in Missoula, Montana, home of the Grizzlies, for GOP Senate candidate Matt Rosendale, who is in a tight race against Sen. Jon Tester (D-MT).

This will be Trump’s third visit to Big Sky country. Trump will visit Arizona on Friday and travel to Nevada for a Saturday morning rally. Trump will then headline a Texas rally on Monday.

Look forward to being there. Something’s happening! #MAGA https://t.co/Cev7giQexE

8:30 PM: Trump now getting ready to speak in beautiful Big Sky country. “I love these hangars,” Trump says. He says he doesn’t have to turn so many people away when he campaigns at hangars. Trump reminiscing about 2016 and says “time flies” when he is doing a good job. Trump says Montanans will send Rosendale to the Senate in 19 days to protect jobs, the second amendment, which is under siege.”

“I wouldn’t want to be the one to walk into your house and say, ‘gimme that gun,’” Trump says.

8:15 PM: Another jam-packed crowd waiting for Trump along with a few left-wing protesters.

This is the scene on the corner of Brooks St. and Russell St. in Missoula right now. #TrumpinMissoula pic.twitter.com/oyTUR1S00O

Checkout these long lines for the Trump rally in #Missoula against the backdrop of the mountains! pic.twitter.com/P8IGXsSssj

Current line for the bus to the rally. Event parking is full, cars parking along W Broadway #trumpmt #mtpol pic.twitter.com/1QFXFuu75B

Update: the parking lot for the #trump rally is full with a line of cars still down the road. #TrumpMissoula pic.twitter.com/9JL0afTBqq