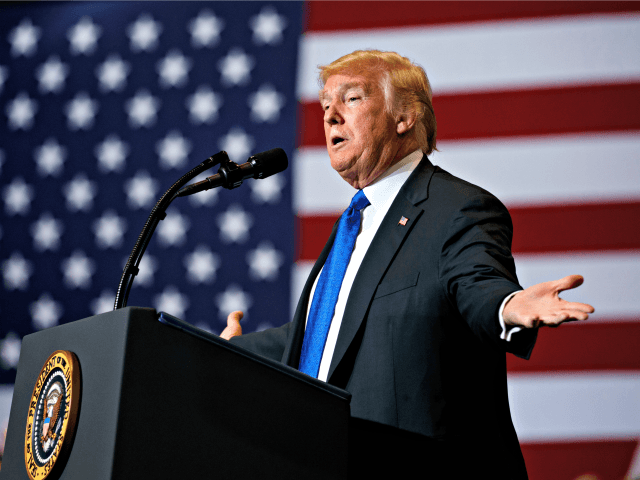 Last night before a Las Vegas, Nevada, rally for Sen. Dean Heller (D-NV), Trump said Democrats are trying to “besmirch” Kavanaugh and said “they have to get on with it.”

“I don’t think you can delay it any longer. They’ve delayed it a week already,” Trump said. “They have to get on with it.”

Today’s joint rally with President Trump and AG Josh Hawley began with a prayer, the Pledge of Allegiance and the National Anthem. pic.twitter.com/lG2l8NJW9O

Pres Trump greets supporters on tarmac on arrival in Springfield, MO for fundraiser and rally. pic.twitter.com/4ACKQ2UOKO

A large crowd outside of the JQH Arena in Springfield, Missouri, over three hours before President Donald Trump is expected to speak at a rally. @realDonaldTrump

The arena has a capacity to hold 11,000 people. pic.twitter.com/ivQo96po1K

Missouri is Trump Country, USA. We’re going to let the president know just how much we appreciate his efforts when he visits Springfield tonight. I couldn’t be more honored to help introduce him at the JQH Arena.

This is the line of people waiting to get their seats for President Trump’s rally at 8:15 a.m. Crazy thing is – doors aren’t opening until a little after 2 p.m. @KOMUnews pic.twitter.com/pQlnSOZH10

President Trump has arrived in Springfield, met by Josh @HawleyMO on the tarmac ahead of tonight’s speech at Missouri State. Reports from @JohnBrownTV coming up at 5 and 6. pic.twitter.com/bSqt70GKgq