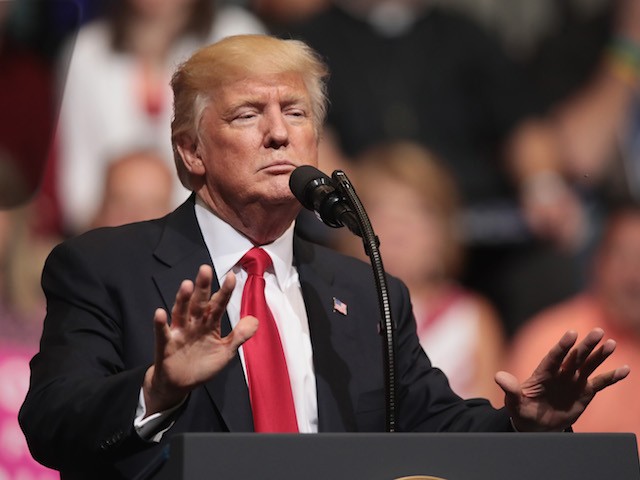 President Donald Trump will hold a rally in Council Bluffs, Iowa, a day after hosting a White House swearing-in ceremony for Supreme Court Justice Brett Kavanaugh and hours after the accepting the resignation of Nikki Haley, his Ambassador to the United Nations.

Trump will hold rallies in Pennsylvania, Ohio, and Kentucky this week as he barnstorms across the country to help Republicans in key races.

In Iowa, Trump will reportedly announce that his administration will allow year-round use of E15—gasoline that has 15% ethanol.

Trump invited the press pool aboard AF1 on flight to Iowa to his personal office for a half-hour chat.

Most off record. But he put one Obama insult on record when we asked about China.

“The Obama administration was impotent about the South China Sea.” pic.twitter.com/mOf39yvyym

Will be going to Iowa tonight for Rally, and more! The Farmers (and all) are very happy with USMCA!

Pres Trump arrives in Omaha, and uses a big umbrella to step off Air Force One, via the built-in stairway for safety’s sake against winds. Motorcades from Omaha across the Missouri River to nearby Council Bluffs, IA., for his rally tonight. pic.twitter.com/gQiu2Qlu5h

Trump rally goers in Council Bluffs, have already stated the Pledge of Allegiance and honored America with the National Anthem. pic.twitter.com/XPsjKQffuE

Lots of folks filing in for @realDonaldTrump rally in Council Bluffs. A local police officer told us based on what he’s seeing he thinks folks will have to be turned away. Officer says Mid-America Center holds about 8K. @KCCINews pic.twitter.com/ygxfZFzKkE

They’ve been queuing for hours in the pouring rain here in Council Bluffs, Iowa. In 90 mins, they’ll get to see the man they’ve been waiting for – President Trump. pic.twitter.com/a1I1beJTf3

Big lines in Council Bluffs, Iowa, for crowd waiting to get into Trump rally. pic.twitter.com/U1KXuJIQ35

Crowds are filing in to see President Donald #Trump speak I Council Bluffs.
We’ll be live with coverage at 5 and 6.#Iowa pic.twitter.com/bMlIVZRNWv