President Donald Trump will deliver his second State of the Union address on Tuesday evening (9 PM ET) before a joint session of Congress. Trump’s speech, which was scheduled for Jan. 29, was postponed because of the government shutdown.

Democrat Stacey Abrams, the failed Georgia gubernatorial candidate who is reportedly thinking about running for Georgia’s Senate seat in 2020, will give the response from Atlanta, Georgia. She will reportedly be surrounded by numerous activists. California Attorney General Xavier Becerra, one of the leaders of the anti-Trump resistance, will deliver the Spanish-language response. Sen. Bernie Sanders (I-VT), will also deliver a response even though he is facing criticism for taking some of the spotlight off of Abrams. Sen. Kamala Harris (D-CA), the 2020 presidential candidate, delivered a prebuttal ahead of Trump’s address.

Stay tuned to Breitbart News throughout the evening for live updates. All times eastern.

9:27: Trump now touts his bipartisan criminal justice reform bill. He speaks about Alice Johnson, who is in attendance and to whom Trump granted clemency (after a bit of lobbying from Kim Kardashian).

9:23: Trump says “an economic miracle is taking place in the United States” and “the only thing that can stop it are foolish wars, politics, or ridiculous partisan investigations.”

“If there is going to be peace and legislation, there cannot be war and investigation,” Trump says.

9:20: After highlighting the record-low unemployment numbers for people of color, Trump says his administration has “unleashed a revolution in American energy.”

“The United States is now the number one producer of oil and natural gas in the world,” he says. “And now, for the first time in 65 years, we are a net exporter of energy. ”

Trump says America is winning “each and every day.”

“Member of Congress, the state of our union is strong,” Trump says.

9:15: Trump asks Americans to reject the politics of “revenge, resistance, and retribution and embrace the boundless potential of cooperation, compromise, and the common good.” Trump says lawmakers can choose between “greatness or gridlock” or “vision or vengeance.” He asks lawmakers to choose “greatness.”

“We must choose between greatness or gridlock, results or resistance, vision or vengeance, incredible progress or pointless destruction,” Trump says. “Tonight, I ask you to choose greatness.”

Trump talks about the “economic boom” that has rarely been seen before. He says the economy is growing twice as fast than when he took office. “There has been nothing like it.” Trump adds, “we are just getting started.” Trump says wages are rising and are growing faster for blue-collar workers. “Hottest economy in the world,” Trump boasts. “Not even close.”

9:11: Trump speaks about D-Day and Moon Landing. He introduces three D-Day veterans/heroes and Buzz Aldrin. He says American astronauts will go back to space this year on “American rockets.” 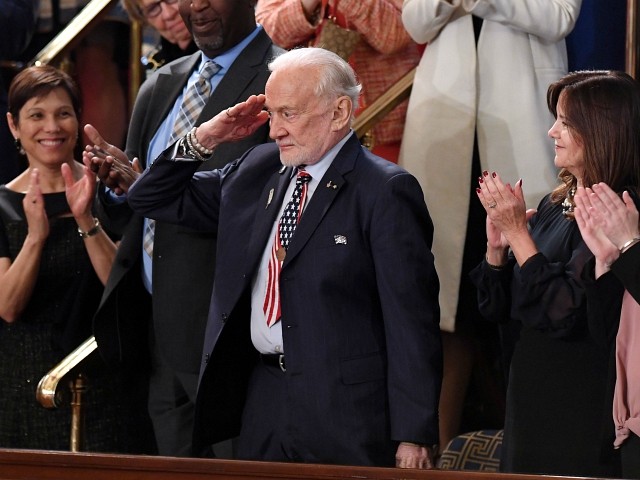 9:07: Trump says he is ready to achieve breakthroughs in the new Congress… “not as two parties…but as one nation.” He says he will lay out an agenda that is not Republican or Democrat.. but “the agenda of the American people.” He talks about fair trade for American workers and revitalizing the nation’s infrastructure. He says there is a new opportunity in American politics “if only we have the courage to seize it.” He also spoke about an America-first foreign policy and revamping the country’s immigration system.

9:00 PM: Trump arrives to deliver the State of the Union address. Most Democrats not applauding.

We hear #POTUS will call for for civility tonight in the #SOTU— I’m all for it, @realDonaldTrump! Let’s see if it’s possible for you to give a speech without calling immigrants criminals, rapists, or terrorists, or to not refer to other nations as “sh*thole countries.”

8:10 PM: On CNN, Ocasio-Cortez, when asked if she is going in with an open mind after tweeting that people should watch “none” of Trump’s State of the Union speech, tries to have it both ways once again and says she’s open to listening to what Trump has to say. Her guest, Ana Maria Archila, says it still “painful” that Brett Kavanaugh is on the Supreme Court and she’ll be in the same room as Kavanaugh tonight.

@POTUS and I are honored to welcome our inspiring guests to join us at #SOTU. Each of them have a story – however painful, joyful, or hopeful – these stories bring all Americans together.

8:00 PM: Harris guffaws before starting her prebuttal. She says we are at an “inflection” point in the history of our nation. She hits on climate change, the “broken criminal justice system,” and racism, sexism, anti-Semitism, homophobia, and transphobia. She talks about healthcare and education being “fundamental rights.” She wants to fight for an America that welcomes refugees and immigrants. Harris says if last year’s remarks are any guide, we’re in store for a speech that seeks to “score political points by driving us apart.” She says Americans will hear “insincere appeals to unity.” Harris says don’t buy Trump’s claims that the economy is doing great. She mentions the federal workers who went 35 days without being paid during the government shutdown. Harris says “don’t forget the babies ripped from their parents’ arms” when Trump talks about the border wall. Harris says the “strength of our union has never been found in the walls we build.” She says it’s in the country’s “diversity” and “unity.”

So proud of @MarshaBlackburn, @timburchett and my parents tonight as they attend the #SOTU to take a stand on #BorderSecurity and represent #AngelFamilies #Tennessee and the #AmericanPeople 🇺🇸🙏🏻 pic.twitter.com/TQCOKIv5OX

Stacey Abrams will take a swing at POTUS on the shutdown, per excerpts from prepared remarks: “The shutdown was a stunt engineered by the President of the United States, one that defied every tenet of fairness and abandoned not just our people-but our values.”

Women in white: ⁦@AOC⁩ and Ana Maria Archila, who confronted Jeff Flake in an elevator during Kavanaugh hearings, ready for SOTU pic.twitter.com/TRqBiSo2LE

House Democratic women dressed in white for the #SOTU walk up the spiral staircase in the HVC —> pic.twitter.com/LMxC4CGJ83

Proud to join House Democrats in wearing white or a white ribbon at the #SOTU to send a respectful message that we stand with women across the country and will continue to defend their rights. I thank @HouseDemWomen for leading this effort. pic.twitter.com/fmYpDMfMcY