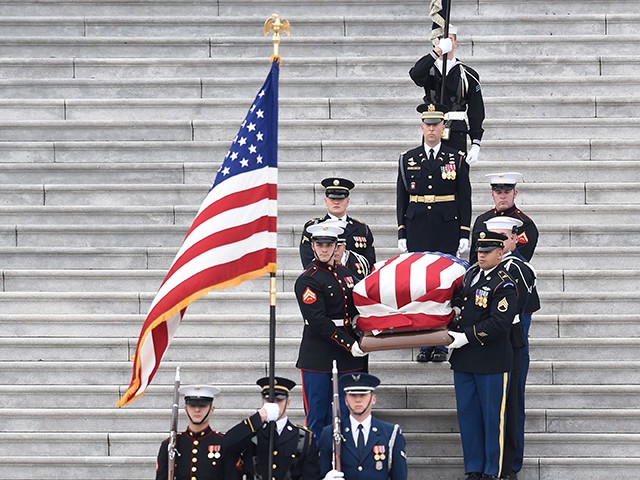 The nation’s capital bids its final farewell to the late former President George H.W. Bush on Wednesday in a service of prayer and praise.

**Follow all of the events on the Breitbart News Livewire below. All times in eastern.**

The National Cathedral is packed to capacity with Americans from all over the country here to honor an American hero and a good man #Bush41 pic.twitter.com/DBLluO68We

Wednesday’s national funeral service will cap three days of remembrance by dignitaries and ordinary citizens. It will bring together world envoys, the four remaining ex-presidents and President Donald Trump.

After Wednesday’s service, Bush’s remains will be returned to Houston to lie in repose at St. Martin’s Episcopal Church before burial Thursday at his family plot.

A solemn moment as the flag-draped casket of former Pres. George H.W. Bush is carried from the U.S. Capitol ahead of a state funeral for the 41st President of the United States. https://t.co/cKodAkVaYd pic.twitter.com/zhLCZHyLEX

A solemn and emotional moment as a military honor guard escorts former Pres. George H.W. Bush’s casket from the U.S. Capitol, watched by his family, congressional leaders, and mourners across the nation. https://t.co/B3hZufXKHW pic.twitter.com/P1LAHRwgNw

Former President George H.W. Bush’s casket has left the U.S. Capitol for a state funeral at the Washington National Cathedral, per the Associated Press.

Family, friends, congressional leaders and others gathered with military brass on the steps of the Capitol for the send-off Wednesday as cannons echoed a salute and a military band played “Hail to the Chief.”

Bush’s flag-draped coffin was carried to a waiting hearse for the procession to the cathedral. His son former President George W. Bush put his hand over heart at the plaza.

People gather at the National Cathedral to celebrate the life, work and civic example of President George H.W. Bush. pic.twitter.com/cWsxoELNtM

A viewing for the 41st president at the hushed Capitol Rotunda closed Wednesday morning. A ceremony at Washington National Cathedral, the nexus of state funerals, will cap three days of remembrance by dignitaries and ordinary citizens as they honored the Republican president who oversaw the post-Cold War transition and led a successful Gulf War, only to lose re-election in a generational shift to Democrat Bill Clinton in 1992.

The four living ex-presidents are coming — among them, George W. Bush will eulogize his father — and President Donald Trump will attend but is not scheduled to speak. Also attending: one king (Jordan), one queen (Jordan), two princes (Britain, Bahrain), Germany’s chancellor and Poland’s president, among representatives of more than a dozen countries.

Also expected in the invitation-only crowd: Mike Lovejoy, a Kennebunkport electrician and fix-it man who has worked at Bush’s Maine summer estate since 1990 and says he was shocked and heartened to be asked to come.

On Tuesday, soldiers, citizens in wheelchairs and long lines of others on foot wound through the Capitol Rotunda to view Bush’s casket and honor a president whose legacy included World War military service and a landmark law affirming the rights of the disabled. Former Sen. Bob Dole, a compatriot in war, peace and political struggle, steadied himself out of his wheelchair and saluted his old friend and one-time rival.

After the national funeral service at the cathedral, Bush’s remains will be returned to Houston to lie in repose at St. Martin’s Episcopal Church before burial Thursday at his family plot on the presidential library grounds at Texas A&M University in College Station. His final resting place will be alongside Barbara Bush, his wife of 73 years who died in April, and Robin Bush, the daughter they lost to leukemia in 1953 at age 3.

Trump ordered the federal government closed Wednesday for a national day of mourning. Flags on public buildings are flying at half-staff for 30 days.

As at notable moments in his life, Bush brought together Republicans and Democrats in his death, and not only the VIPs.