Hurricane Michael, the tropical storm that surprisingly intensified into a Category 4 hurricane in a matter of days, is about to hit the Florida Panhandle with wind speeds over 100 miles per hour and storm surges up to six feet high. Follow Breitbart News for updates on the storm’s progress and stories from the people in its path.

Getting in to the outer bands of #Hurricane #Michael in #Tallahassee pic.twitter.com/Ao196u8d7v

10:32 AM — The latest wire photos on Hurricane Michael: 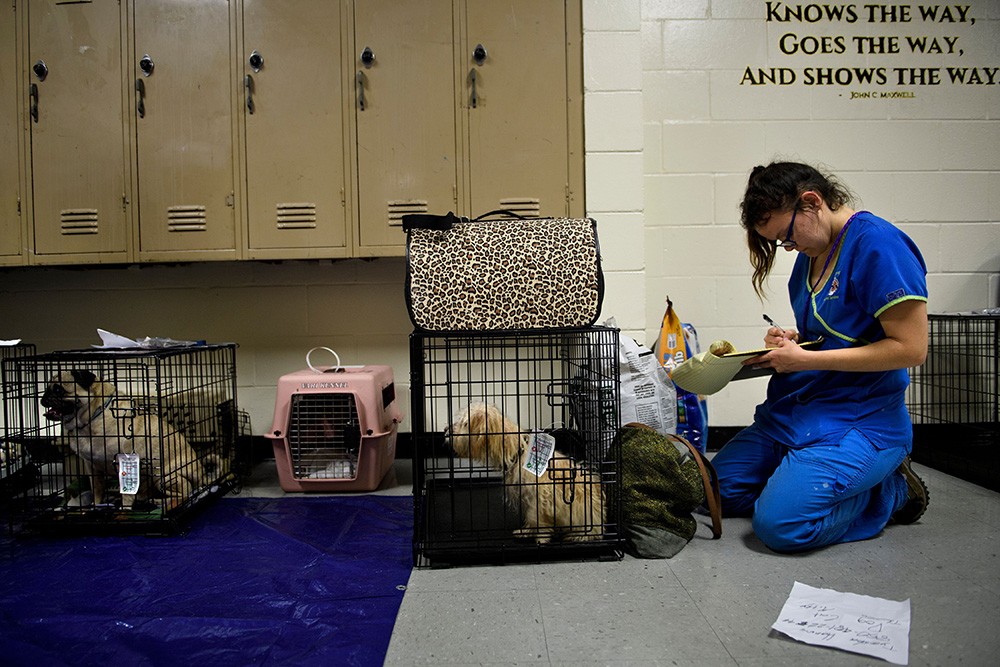 Pets are checked in, as people seek safety in a shelter as Hurricane Michael approaches on October 10, 2018 in Panama City, Florida. (Photo by Brendan Smialowski / AFP / Getty Images) 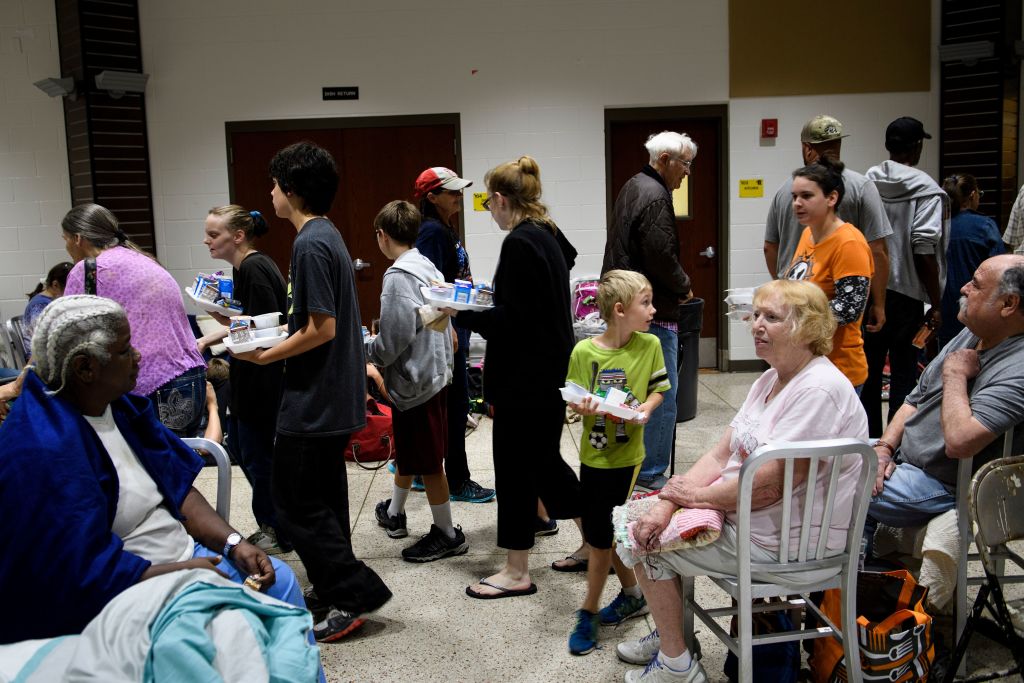 People wait for breakfast as they and others seek safety in a shelter as Hurricane Michael approaches on October 10, 2018 in Panama City, Florida. (Photo by Brendan Smialowski / AFP / Getty Images) 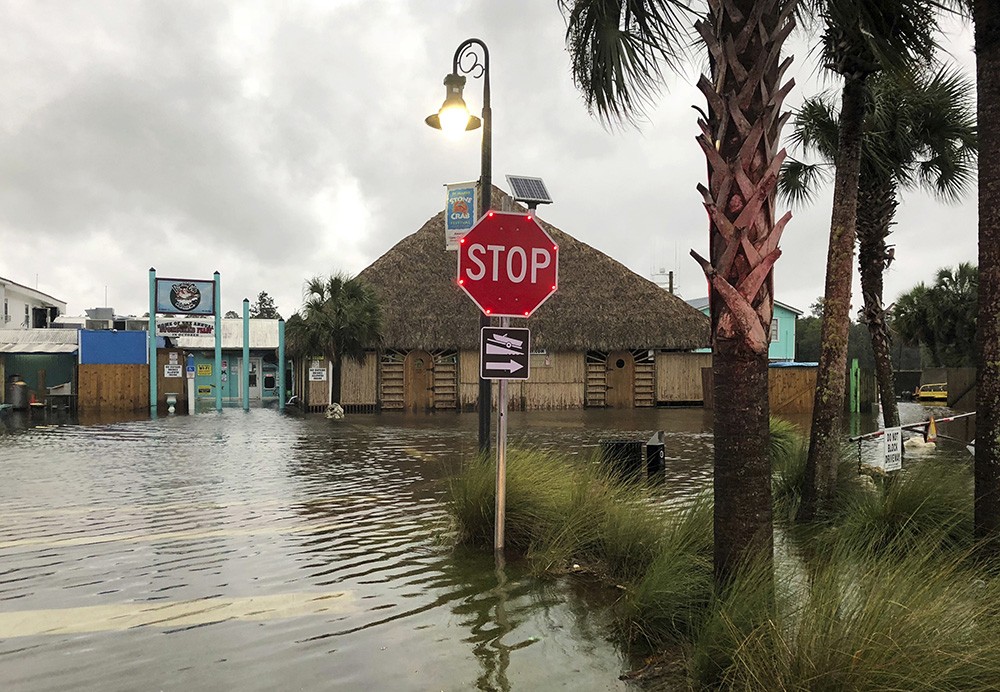 The St. Marks River overflows into the city of St. Marks, Fla., ahead of Hurricane Michael, Wednesday, Oct. 10, 2018. The hurricane center says Michael will be the first Category 4 hurricane to make landfall on the Florida Panhandle. (AP Photo/Brendan Farrington) 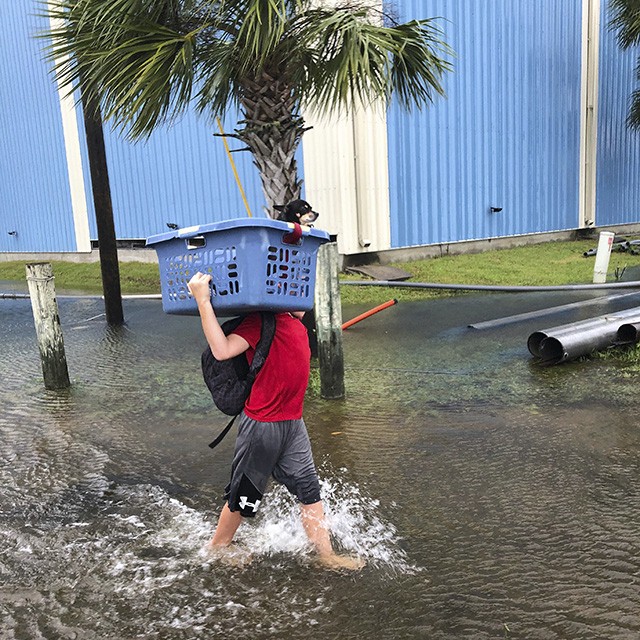 Jayden Morgan carries his dog through a flooded street in St. Marks, Fla., on Wednesday, Oct. 10, 2018, as his family evacuates at the last minute before Hurricane Michael hits the state. (AP Photo/Brendan Farrington)

It’s been 13 years since this part of the Florida coast has seen a hurricane make landfall. #HurricaneMichael pic.twitter.com/5azT3PjuqZ

The flooding is already beginning in Okaloosa County, Florida, and Hurricane Michael has not even made landfall yet. https://t.co/U2JliVF2bR #HurricaneMichael pic.twitter.com/ORspjoXBvh

10:15 AM — The latest videos and photos of Hurricane Michael:

Cameras outside the station captured views of Hurricane Michael at 12:13pm and 12:50pm ET Oct. 9 as the storm churned over the Gulf of Mexico moving northwest at 12 miles an hour. pic.twitter.com/vkiK7xWgMm

And the latest wire updates from AP:

Graham says Michael’s top winds of 145 mph (230 kph) are powerful enough to peel off roofs and cause the “complete destruction of houses.”

Stretches of the coast could see storm surge of at least 6 feet (2 meters), with waters rising in some places up to 14 feet (4 meters) above the ground. Graham wants people to think about how tall they are, and just how high that water can be.

Michael is powerful enough to remain a hurricane well inland as it travels over Georgia on Thursday. Graham says falling trees will pull down utility lines, leaving some areas without power for weeks, and hazardous conditions will persist long after the storm blows through.

He says the aftermath of a hurricane is “not the time to start learning to use that chain saw.”

Florida Gov. Rick Scott says the impact of Hurricane Michael will be “horrible,” the worst storm to hit the Panhandle in a century.

Scott said Wednesday he’s “scared to death” that people in places such as St. George Island along the state’s coast had ignored evacuation orders.

He said he hopes that no one kept children with them as they chose to ride it out, but the time to evacuate from coastal areas has “come and gone.”

The governor said state authorities are now focusing on the recovery effort once the fast-moving storm blows through. He has activated up 3,500 members of the Florida National Guard and says thousands of utility workers are on stand-by.

Huge waves are pounding the shore at Panama City Beach, where officials have announced they are now unable to respond to any calls for service. Just inland in Panama City, the fire department says it will respond to only life-threatening emergencies and only within the city limits.

The biggest waves are shooting frothy green water between homes and up to the base of wooden stairs over the dunes and the skies appear menacing as tropical-storm-force winds lash the coast. Landfall is expected about midday Wednesday.