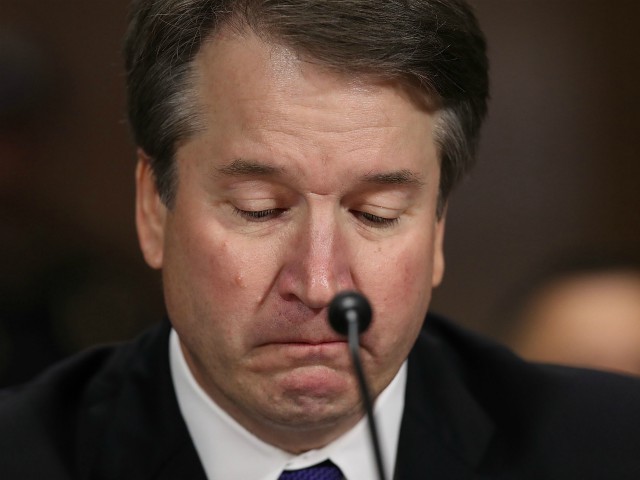 The Senate Judiciary Committee kicked off a hearing on Thursday morning in which Supreme Court nominee Judge Brett Kavanaugh and his accuser, Christine Blasey Ford delivered testimony about Ford’s allegation that Kavanaugh assaulted her during a party in 1982.

Dr. Ford answered a round of questions, for more than five hours, from Senate Democrats and Rachel Mitchell, the Arizona prosecutor who asked Dr. Ford questions on the Senate Republicans’ behalf.

Judge Kavanaugh began his portion of the Senate hearing on Thursday at 3:11 pm, swearing under oath to tell the truth.
“I am innocent of this charge,” the judge said of the allegations against him brought by Dr. Ford.

Below are live updates (all times eastern) of the reaction to today’s hearings from Hollywood figures, many of which have protested President Donald Trump’s Supreme Court nominee.

Watching these republican men keep apologizing to Brett Kavanaugh for all he’s been through is nauseating and serves as yet another reminder we need to VOTE these garbage assholes out in November @letamericavote https://t.co/GhFkuvczRX

All of these GOP senators apologizing to Judge Kavanaugh for what he’s been through. None of them apologized to Dr. Ford for what she’d been through. They wouldn’t even speak to her.

6:02 pm – Actor Chris Evans chimed in with this question.

You know what’s insane? If a recording came out today of Kavanaugh, not from high school, or even college, but from just a few years ago, where he said he could ‘grab women by the pussy’, he would be DONE.

Why is the president of the United States held to a different standard?

5:50 pm – This is what actor Billy Eichner is thinking about during the Kavanaugh hearing.

Can I play Lindsay Graham in the movie? I’m very good at shouting random nonsense.

6:01 pm – Eight hours into the hearings, the committee has adjourned for a brief break.

Oh so you agree with Anita Hill, @OrrinHatch?

He could never be an impartial judge

The tears, the attacks, the anger. It’s like Alex Jones from InfoWars is testifying.

#Kavanaugh As a Damn Judge should be calling for ALL accusers and witnesses to be heard by this dumb committee or call for an FBI investigation even IF he is the accused. Otherwise he truly doesn’t believe in real equality in Justice.

No, fucknuts. We’re judging it on the ragefest he directs at being questioned WHILE REFUSING TO ASK FOR AN INVESTIGATION, GIVE A STATEMENT TO THE FBI UNDER OATH AND URGE MR. JUDGE TO HONOR A SUBPEONA AND GIVE TESTIMONY AS WELL. That’s a big tell. https://t.co/R1dmAvS0Gy

We should have a man and a woman representing each district and state to guarantee 50/50 representation.

4:46 pm – Producer Danny Zuker said this about who he thinks Judge Kavanaugh is.

Kav thinks he’s being tough but he’s finally showing himself to be EXACTLY the person Dr. Ford described.

I don’t believe a word he says or how he says it.

100%. Kavanaugh is lying his ass off. If he wasn’t he’d be demanding an FBI investigation.

4:19 pm – Actor Josh Malina shared a Spotify link to a song called “The Tears Of A Clown.”

I think this is true. https://t.co/lqBJPFAM2p

4:11 pm – Actress Alyssa Milano had this to say of the hearing and Judge Kavanaugh’s remarks.

I will say this…if a woman were to yell, interrupt and cry while being questioned, people would call her unhinged or say she had a melt down. pic.twitter.com/qBDuBP0QHt

So, when a woman cries and says no it’s different from when a man cries in a senate hearing ? #KavanaughHearings

3:55 – pm – Actor John Cusack has this to say about Judge Kavanaugh’s opening remarks.

I think he’s crying more then the woman who re/ lived an attempted rape on national tv – no ? https://t.co/vjQSPRyj41

3:53 pm – This Is Us producer Ken Olin sent this tweet during Judge Kavanaugh’s opening remarks.

Incredibly, the defense of another privileged white man accused of terrible behavior towards a woman is claiming he’s the victim. He’s crying, but not because he’s innocent, it’s because he feels very sorry for himself. That isn’t the truth, it’s a sentimental and false narrative

His opening statement has NOTHING to do with the allegations leveled against him.

Regardless of where you stand on this, I think we all share one thing in common: This is the first time any of us have ever seen a grown man cry about his quarterback, his calendar, and Caddyshack all within the same sentence.

I couid cry sbout my yearbook too

Ruth Bader Ginsberg is about to bust into the room and punch this motherfucker in the face.

#Kavanaugh is a better actor than me! He is crying cause he got busted but not because he has remorse!

Oh God — stop crying. How could he even rule if he’s gonna slobbering on like this. The Oscar goes to….

I see that Brett Kavanaugh is giving us great examples of his dispassionate, calm and considered judicial temperament, so needed on the very partisan and divided Supreme Court of today. Whew! I feel so much better.

Not sure we should have someone so emotional on the Supreme Court. #KavanaughHearings

He’s bad at this.

Brett Kavanaugh is right now putting his hand over America’s mouth, telling us not to scream and turning up the music.

Who coached him to sound like a complete asshole?