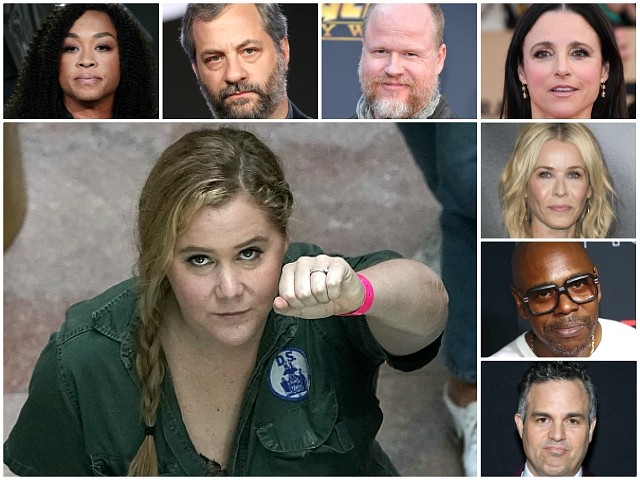 Hollywood celebrities revved up their social media sniveling in the waning hours before the highly anticipated midterm elections. The hysteria among Hollywood elites reached a fever pitch on Monday, with countless stars sharing unhinged screeds, snark, and smears about Republican candidates and President Donald Trump.

Below is the Breitbart Election Eve Celebrity Live Wire, where we will follow the latest midterm news and reaction from the most vocal Hollywood activists.

Amy Schumer shared a video of her ultrasound, in which she urged her followers to vote.

Judd Apatow doesn’t want you to forget to tune in to the telethon where left-wing celebrities beg people to go out and vote.

Cher wants you to know that your vote, like hers, is a “matter of life and death.”

I have been alive through 13 Presidencies and I never thought my vote 🗳would be a matter of life or death. Given this administration’s disregard for pre-existing conditions, climate change, gun reform and so much more, it is life or death. 🙏🏻Please Vote🙏🏻 https://t.co/CHKIQMCowm

Can I interest you in a meme that’s really just a concerted effort for you to make sure to vote this Tuesday? #VoteBlue #VOTEFOROURLIVES 🗳 https://t.co/3odceAQUxN pic.twitter.com/6SOq3lwj9I

Actress Debra Messing is all up in arms about … voting machines.

Here actress Elizabeth Perkins details how she voted for the Blue Wave and waited in line to do so.

I voted. Stood in line for 2 1/2 hours. Didn’t care. Voted for gunsense candidates. Voted Blue Wave. Voted because the strength of our democracy and the lives of our children demands it. @MomsDemand @Everytown #VOTE Then come home and and take a pic. Post it here! We can do this! pic.twitter.com/ZXEj9eIQfb

Actor Ike Barinholtz admits the election is making him crazy.

LOL this election tomorrow has me so crazy I thought I just read a news story that said Ivanka Trump’s company is making voting machines https://t.co/kmSmzvnPUI

Actress Brie Larson wants you to be a superhero like her and vote.

CAPTAIN MARVOTE IS A BAD PUN BUT NOW THAT I HAVE YOUR ATTENTION PLEASE VOTE TOMORROW pic.twitter.com/ZhXk5Qzkt5

Big bloated government like a Board of Elections? You idiot. GTFO off my timeline, nationalist troll. We all know what Nationalism means. Piss off. https://t.co/n2z118x0lK

Nothing should get in the way of our ability to elect people who represent our communities. If you have questions about your rights, polling place, voter ID – or if you feel intimidated at the polls- call @866OURVOTE They will help you #ProtectOurVote #Midterms2018 pic.twitter.com/2AJYET781U

Jimmy Kimmel came back online to share a list of names of lawmakers he says gutting protections for people with preexisting conditions.

A handy list of candidates for Senate who voted to gut protections for people with pre-existing conditions. #vote pic.twitter.com/Y6Jc8wkbXv

Michael Moore threw his support behind a couple Michigan Democrats, accusing Republicans of poisoning the people.

FELLOW MICHIGANDERS! I urge you to vote Whitmer/Gilchrist for Governor and Lt. Governor! The Republicans poisoned the people of Flint. They not only deserve defeat, some of them belong in prison. Please, for Flint, for me, vote DEM tomorrow! https://t.co/JmNdDAw7TP pic.twitter.com/IPwOfL6iy3

Voted absentee with love. Have you voted yet? If not, what’s your plan for tomorrow? pic.twitter.com/PaD5j0Id87

Bette Midler put on her economist hat to share this message with voters in red states.

Hey #RedStates! In your hearts you know that great big tax cut is not gonna help you! That tax cut went to the 1%, just like everything else the GOP does! Totally two-faced, they promise one thing and laugh about us behind our backs! Bring some balance back! #VoteBlueForYou!

A telethon where the point is to raise $0? Instead of $$, we’re asking you to pledge to vote!

Watch this new powerful video with me & @_juliannemoore! Join us in voting on Tuesday Nov 6. We shall overcome with justice and love. pic.twitter.com/lfdlqcohtz @wsucampaign

For Rosie O’Donnell, it all comes down to three things: Eat. Sleep. Vote.

NBCUniversal Pulls Trump Campaign’s ‘Insensitive’ Immigration Ad After Backlash—TRUMP IS SO RACIST EVEN ⁦@FoxNews⁩ WON’T RUN HIS AD. Vote these people out! https://t.co/V1TTcTUVgH can tell you where your polling place is and other info. https://t.co/zof03neSHm

There is s vote against a party that’s turned into a deathkkult – led by a mentally ill – fascist –
All you have to do is vote blue – this election to do the right moral thing –
Take them to vote https://t.co/Y7kgzcE5eU

Bette Midler released her list of lawmaker who she says will take us our of the 19th century.

Actress Amy Brenneman decided that a selfie was the best way to motivate people to vote.

Ready for the final push before the #midterms. Have we voted yet? Are we ready? Let’s unite and make some change! #28DaysofAction pic.twitter.com/67032wKdAJ

Barbra Streisand took a break from her album promotion to share this warning.

Republican tax cuts will raise the deficit $1.3 TRILLION. Social Security, Healthcare, Medicare & Medicaid are in peril.The stock market has gained nothing this yr.If you’re concerned abt the economy, send Trump a msg and VOTE Democratic up/down the ballot https://t.co/5qknHuAADZ

“I hope everyone back home exercises their precious right to vote. And that whether the Republicans or the Democrats win, that we all remember that we have far more as Americans that unites us than divides us,” Brent Taylor father of 7 died while volunteering to serve. A hero.

Actor Josh Gad wants you to know how important tomorrow is.

Tomorrow is probably the most important day of 2018, outside of my birthday. It’s called #ElectionDay & it’s super fun. It’s like Red Dead Redemption 2, but real & not a Western or a video game. Go & make yourself heard. If we all VOTE, it will be like winning RDR2 but different

Late-host Jimmy Kimmel has a serious message about pancakes and voting.

Even pancakes know how important it is to #VOTE pic.twitter.com/JhuqCrmyko

House of Cards actor Michael Kelly is excited to vote!

If you don’t think your vote matters, look how hard this man is trying to suppress it. #vOtE pic.twitter.com/l1JFUcFAyB

Alec Baldwin took a break from street brawling to remind us all about the stakes riding on these midterms.

Everything depends on it.

5. Because it’s time to elect people who care about POC, LGBTQ people, women, and equality for everyone.

In case you were wondering, here’s who actor Mark Ruffalo is supporting.

I’ll be voting for Antonio Delgado in #NY19 tomorrow and you should, too. @DelgadoforNY19 pic.twitter.com/ImFguvbakw

Seth Rogen is all in, you guys.

Here’s Handler again pushing a telethon that will see a slew of celebrities asking people to pledge to vote on Tuesday.

It’s the day before #ElectionDay and I want to talk to YOU. Make a plan to vote and you could get a phone call from me during the #TelethonForAmerica powered by @WhenWeAllVote. Watch live Nov. 5 at 9pm ET / 6pm PT at https://t.co/Ngiqsp1VoO. pic.twitter.com/YA1Uye0gGl

Actor Zach Braff has this message for young voters.

Young folks who follow me, (you get to be called young if you’re 18-29) you have to show up tomorrow. You have to bring your friends. The future is in your hands. pic.twitter.com/iI77AF6KTL

Actor Patton Oswalt just wanted to make sure his followers have a plan to vote.

You guys ready for tomorrow? What’s your plan? How many friends are you bringing? Let me know, I’m RT’ing these next two days!!!! pic.twitter.com/kGrnKwHCIi

Comedian and actress Wanda Sykes passed on these words of wisdom to Republicans.

Ellen producer Andy Lassner had this to say.

Not voting is not an act of rebellion. It is an act of surrender. pic.twitter.com/dSeApkxXay

Chelsea Handler was up early urging her follower to head to the polls.

Young voters! I know you want to be heard. This is go time. Do not sit out an election that will impact your future and the future of your children. Prove polls wrong. Take a stand. https://t.co/DzTeXiSGDO

Go Beto! Go Democrats! Vote like there’s no tomorrow. Let’s make this Tuesday like the end of every great vampire movie. Pull back the curtains and let the sunshine turn all those bloodsuckers to dust. pic.twitter.com/WWwspze5fU

Actor-comedian Dave Chappelle is ramping up his support for Democrat candidate Ben Jealous.