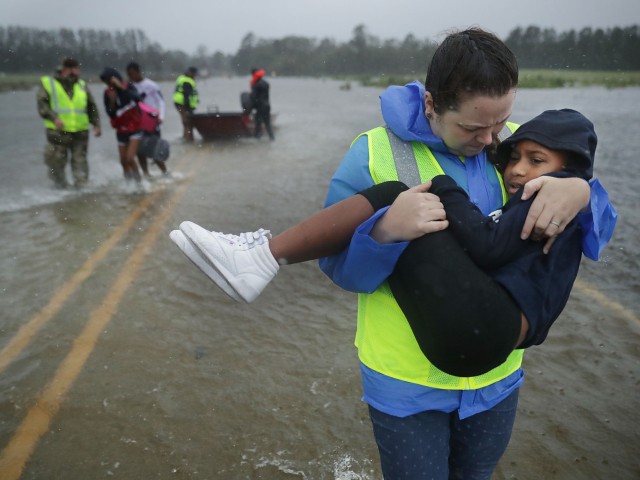 Tropical Storm Florence continues to batter the Carolinas as authorities fear catastrophic flash flooding will wreak mass destruction across the region, causing the death toll to rise. The storm is currently swirling at a near-standstill, dumping torrential rain over areas already flooded by seawater and swelling rivers across both states.

► National Hurricane Center downgraded Florence from a hurricane to a tropical storm on Friday.

► At least five people are dead as Florence batters the Carolinas.

► Reuters reports at least 895,000 people are without power across the Carolinas.

11:24 AM: North Carolina transportation official warned “roads open today may be closed by this afternoon,” as Florence lashes the region. “I do anticipate tomorrow we’ll have a significant increase in the number of roads covered in water,” he told reporters.

North Carolina transportation official on road conditions during Tropical Storm #Florence: “Roads open today may be closed by this afternoon.”

“I do anticipate tomorrow we’ll have a significant increase in the number of roads covered in water.” https://t.co/ozeco1O16F pic.twitter.com/iaaWHCs5Qi

11:05 AM: Tropical Storm Florence continues to weaken as it dumps dangerous amounts of rain across the Carolinas, according to the Associated Press.

At 11 a.m. Saturday, Florence was moving west at 2 mph (4 kph), with its center located about 40 miles (65 kilometers) west of Myrtle Beach, South Carolina.

The storm’s extremely slow speed means the risk of catastrophic flooding remains high across both states. Some areas are forecast to receive up to 15 inches more rain, and storm totals could reach over 3 feet in some areas for the week.

10:53 AM: The Associated Press reports North Carolina’s Harnett County has declared a mandatory evacuation along a river that’s expected to rise to more than 17 feet above flood stage.

On its Facebook page, the county said the evacuation was in effect along the Lower Little River near the Cumberland County line.

The National Weather Service is forecasting the river to crest at Manchester at 35.4 feet at about 8 a.m. Monday. Flood stage is 18 feet.

The previous record crest was 29 feet set during Hurricane Matthew in 2016.

The river is forecast to reach flood stage sometime after 2 a.m. Sunday.