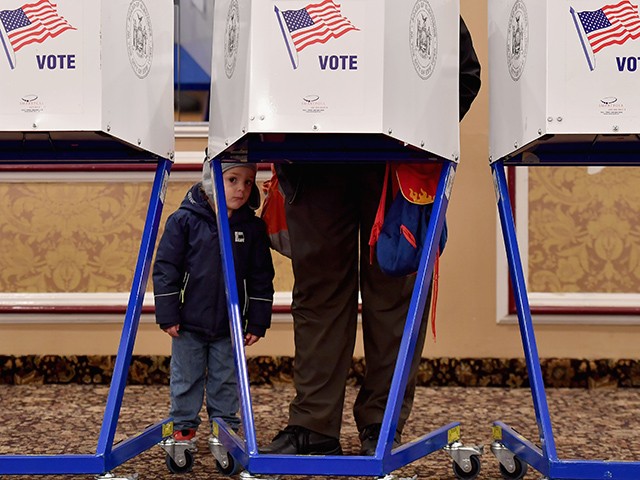 Americans are headed to the polls on Tuesday’s national midterm elections to decide who will control Congress for the next two years and to elect senators and governors in various states.

Follow Breitbart News for live updates throughout the day and night. All times eastern.

Long lines just to put ballots through the machines in Scarborough. I’m told each ballot takes about 15 seconds to load. Doesn’t sound like much but with this volume it’s taking patience!#Vote2018ME #mepolitics pic.twitter.com/awYHnNes8t

Line to vote is out the door at this firehouse in Prince William County. Half the voters registered to vote here had cast their ballots by noon. pic.twitter.com/9ixd2xsbbr

Americans asking GOOGLE who to vote for… https://t.co/0zcVcO32rJ

12:11 PM — Department of Homeland Security (DHS) says that reported issues are not substantially affecting precincts in a conference call with reporters.

DHS officials know about broken machines being reported across the country, but are not spotting any widespread trends or substantial impacts on voting

12:06 PM — Arizona had quite the hiccup this morning as a polling location was FORECLOSED overnight.

AZ MIDTERMS- POLLING PLACE FORECLOSED- VO TUE0161- Polls in Maricopa County and Arizona opened at 6am but some Valley locations are already experiencing issues. Three polling places are currently down, incl in the Gila Precinct in Chandler. The building was foreclosed overnight. pic.twitter.com/8LSP5iykVD

Poll workers hurrying to set up temporary voting location for Gila Precinct in Chandler after landlord foreclosed on building overnight. Voters can now head to Chandler City Hall instead. Drop off mail in Ballots at Praise and Worship Center at 2551 N. AZ Ave Chandler. #12News pic.twitter.com/4jbF2a8Kqd

11:47 AM — The Washington Post reports on a Texas woman who voted (early, last week) for the very first time and passed away Monday. Buried in the second to last paragraph: “She wanted to drain the swamp. She voted straight-ticket Republican.”

11:43 AM — Duck Dynasty’s Phil Robertson reads from the book of 2nd Timothy in an election-day video posted to Facebook. Cites the Kavanaugh hearings circus, the crowd booing God at the DNC, then urges his fans to vote against Democrats.

SUNSHINE STATE: Republican candidate for governor Ron DeSantis arrived with his family to cast his vote in Ponte Vedra, Florida, as he faces a tight election with Democrat Andrew Gillum. https://t.co/m2AvPoGj8F pic.twitter.com/2PGvIB7FgB

WATCH: Pamela, 77, with her oxygen tank and her “BETO FOR SENATE” T-shirt, fights back tears while talking about seeing Rep. O’Rourke while they both voted in Texas this morning:

“We’re honored that he was here … We want him to win.”https://t.co/qDB70fNNbp pic.twitter.com/zpapr62e1c

11:28 AM — “Humidity causes issues with ballot machines in Wake, other NC counties,” according to election officials.

11:16 AM — WXYZ reports that a polling station in Detroit turned away people this morning because the election volunteers could not set up any voting machines; they were in a locked room far away from the polling station inside Martin Luther King Jr. High School.