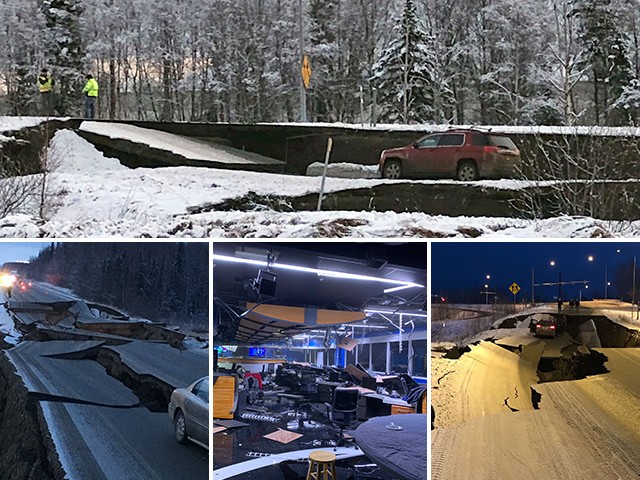 “Part of our ceiling’s come down, and our equipment is everywhere.”

3:02 PM — The Providence Alaska Medical Center in Anchorage says it has canceled elective surgeries and that the hospital experienced multiple water leaks, according to the Associated Press.

The hospital says in a statement that there was not a large influx of patients after the quake rocked Anchorage Tuesday morning.

3:00 PM — The operators of the 800-mile long trans-Alaska pipeline said they shut the system down as a precaution following the earthquake in southcentral Alaska, the Associated Press reports.

Michelle Egan is a spokeswoman with Alyeska Pipeline Service Company.

She says there is no known damage to the pipeline.

She says data will be assessed at an operations center and a physical inspection of the line will be performed.

She says pipeline can be restarted before the physical assessment is complete.

Due to a significant earthquake in Anchorage, Alaska, we are temporarily suspending operations at the airport until at least 12:30pm Pacific.

We will keep you updated here as well as on the Alaska Airlines Blog. https://t.co/m7heW6QgsU

TSA is screening passengers. Baggage screening is down and delaying departures. Check with your airline.

2:47 PM — Scene from inside Anchorage International Airport as the earthquake hit.

Terrifying moments inside Anchorage International Airport during the earthquake. pic.twitter.com/rmI8oN2RoZ

😯 Widespread damage has been reported in Anchorage after a massive 7.0 earthquake shook the region: https://t.co/gPHpQQDHGO pic.twitter.com/eNIPBwDeQT

Here are some photos from inside an apartment in #Anchorage #Alaska after the 7.0 mag #earthquake. Multiple aftershocks are still being reported. #AlaskaEarthquake pic.twitter.com/U8BkakOMoE

WATCH: A father watches his wife, son and dogs as the earthquake hits their home in Palmer, AK. He says that everything is ok, just some broken items. #fox10phoenix https://t.co/EUPVeTQnwh
📸 Eric Nelius / @Alaskatugboater pic.twitter.com/dKL5WRGRvv

Dillon Vought shot this video of damage to the road after Friday’s #earthquake in Anchorage, #Alaska. In the video, you can see that the road surface at an exit has collapsed https://t.co/nOsVtjMDH5 pic.twitter.com/nhyAD3pH2Y

Major #earthquake damage to the only road between #Anchorage and #Wasilla / #Palmer #Alaska. Photo from @gbreshears pic.twitter.com/qPzGjzFIhU

7.2 earthquake here in Anchorage, Alaska. This is a video my dad took from the Minnesota exit ramp from international. ὣὣ pic.twitter.com/1yOGj3yz9q

Here it is zoomed in. Thank god these pol are ok!!! #Anchorage pic.twitter.com/dqmy6kx7nb

Here is a picture a high school friend who lives in Anchorage just sent. pic.twitter.com/Q5YmMDkKZ1

The earthquake that shook Anchorage and damaged roadways also knocked many traffic lights out of service and has snarled traffic, per the Associated Press.

Jeremy Zidek, a spokesman for the state’s Division of Homeland Security and Emergency Management, said the earthquake also disrupted some communications and electrical service.

The Anchorage School District canceled classes for its more than 100 schools and asked parents to pick up their kids when they could.

The district wants to examine its buildings for potential damage and check for any potential gas leaks.

State government offices in Anchorage were also closed so officials could assess the damage.

FAA spokesman Allen Kenitzer in Washington state said Friday it’s not known when inbound flights will resume and that travelers should check with their airlines.

Kenitzer and Alaska transportation spokeswoman Meadow Bailey say telephone service is out at the airport.

The FAA spokesman says the airport tower was evacuated and flights that could be diverted were being sent to Kodiak.

He says inbound international flights to Anchorage were being guided by controllers at a regional radar approach facility.

Alaska Gov. Bill Walker tweeted that he has issued a disaster declaration.

(1/2) After a major earthquake, I have issued a declaration of disaster & I have been in direct contact with the White House. Major General Laurie Hummel & I are now working w emergency responders to make sure Alaskans are safe.

(2/2) From the incident command center established at Joint Base Elmendorf and Richardson we are closely monitoring reports of aftershocks and assessing damage to roads, bridges and buildings.

My family is praying for yours. God bless Alaska.

Here’s the islanded car at the wrecked anchorage off ramp. pic.twitter.com/626As53hzF

Traffic is at a standstill on the Glenn Highway going towards the valley. #ktva #anchorage #weather #earthquake pic.twitter.com/s0aYRjj7wh

How the #earthquake that devastated Anchorage, #Alaska appeared to a seismograph more than 3,000 miles away at @millersvilleu pic.twitter.com/axKQYQ38ko

The President has been briefed on the earthquake near Anchorage, Alaska, and is monitoring damage reports. We are praying for the safety of all Alaskans!

2:11 PM — Former Alaska Gov. Sarah Palin tweets that while her family is safe, her home sustained damages. “So thankful to be safe; praying for our state following the earthquake,” the conservative stalwart says.

🙏🏼 for Alaska. Our family is intact – house is not… I imagine that’s the case for many, many others. So thankful to be safe; praying for our state following the earthquake.

BREAKING: Officials have canceled a tsunami warning for southern Alaska that was issued following the 7.0-magnitude earthquake.

2:05 PM — The National Tsunami Warning Center has issued a tsunami warning for coastal zones of southern Alaska following an earthquake that rocked buildings in downtown Anchorage.

The center said Friday that the warning was in effect for parts of the state’s Cook Inlet and the southern Kenai Peninsula.

The U.S. Geological Survey initially said it was a 6.7 magnitude earthquake and then reduced that to 6.6.

The quake was centered about 7 miles (12 kilometers) north of Alaska’s largest city.

A 6.6 magnitude earthquake has rocked buildings in Anchorage and caused lamp posts and trees to sway, prompting people to run out of offices and seek shelter under office desks.

An Associated Press reporter working in downtown Anchorage saw cracks in a 2-story building after the quake. It was unclear whether there were injuries.

People went back inside buildings after the earthquake but a smaller aftershock a short time later sent them running back into the streets again.