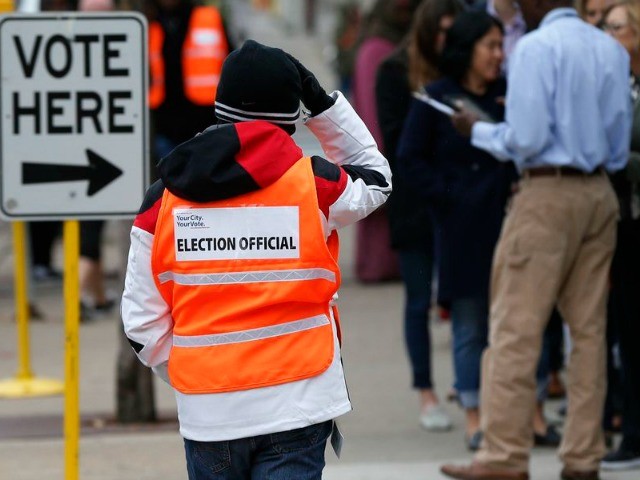 Welcome to the Breitbart News LiveWire of the 2018 midterm elections. Democrats need to pick up 23 seats to take back the House of Representatives and House Minority Leader Nancy Pelosi (D-CA), who is looking to regain her Speakership, said earlier in the day that she is 100% certain that Democrats will win back the House. As David Axelrod said on CNN, Trump will either win the House tonight or retiring House Speaker Paul Ryan (R-WI) will lose it.

Democrats are less optimistic about taking back the Senate, especially after President Donald Trump barnstormed across the country in recent weeks to stump for key Republican Senate candidates. Odds favor Republicans maintaining control of the Senate and perhaps even gaining a few seats.

All eyes will also be on key gubernatorial races in states (Georgia, Florida, Ohio, Wisconsin) that will have huge 2020 ramifications.

Stay tuned throughout the evening for live updates of all of the important races. All times eastern.

Context for some early county results in #INSEN:

JUST IN: According to the Davidson County Election Commission voter turnout in Nashville has surpassed Election Day turnout from 2016 #GoVoteTN #Election2018 #TNSen

6:20 PM: INDIANA SENATE: 52% of Hoosiers approve of Trump, according to CNN’s exit polling.

All of the counties reporting so far in Indiana are rural, more Republican counties. They have staked Braun to a healthy lead over Donnelly.

Here are the #ElectionDay poll closes for tonight, starting with Indiana and Kentucky at 6pm. I see you Cass County, N.D. pic.twitter.com/vYyfHinW8v

Polls have closed in Indiana and Kentucky. Results are being reported. Fox News has a countdown till 7pm when they say the “First Polls Close” — c’mon man, do better.

KY-6 isn't really a bellwether, but one reason Republicans have been watching it closely is that many have quietly assumed Amy McGrath, the Democrat, could challenge Mitch McConnell for his Senate seat in 2020 if she wins.

6:08 PM: The media and establishment Republicans have done everything they could to downplay the obvious in past elections. Immigration matters to Americans:

LATEST: @NBCNews exit polls show immigration was the most important issue among 41% of Republican voters. pic.twitter.com/MLwdKE3oUA

Sex: Women account for 52 percent of voters in preliminary results, matching their previous high in a midterm from 2010.

Race: Nonwhites account for 28 percent of voters nationally in preliminary results. The highest in any previous midterm was 25 percent in 2014. These compare with a low of 9 percent in 1990.

More Early @NBC Exit Poll results: One In Four Hispanics Say They Cast a Midterm Ballot for the First Time in 2018. 1 in 5 for African Americans. 1 in 10 for whites.

6:02 PM: According to CNN’s exit polls, 16% are first-time voters and 65% made up their minds about House races more than a month ago.

6 PM: Polls are closed in some parts of Indiana and Kentucky. The first close race of the night will be between Rep. Andy Barr (R-KY) and Democrat Amy McGrath in Kentucky’s 6th District.

We’re inside the Marriott in Lexington. The signs are up and lights ready for Rep. Andy Barr’s election night party. The party starts here at 6 p.m. sharp. #ElectionDay #KY06 #BarrElectionParty pic.twitter.com/QGVWqQM9K6