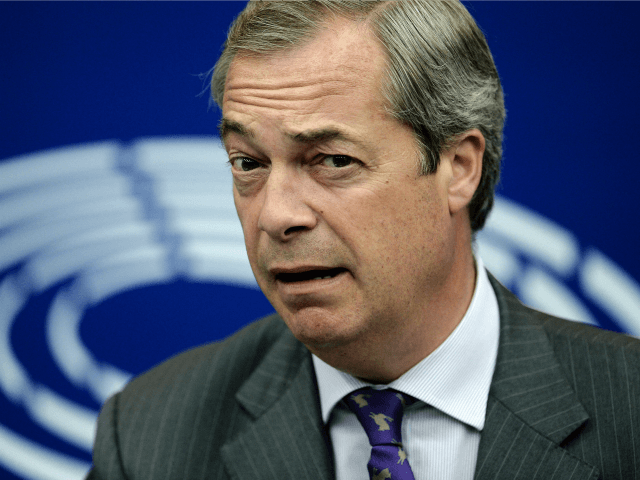 Speaking to Breitbart News editor in chief Alex Marlow on the Daily show, former UKIP boss and top Brexit campaigner Mr Farage described the European Union membership referendum as a “seismic” event in British history but said the implications of the vote were being ignored and Britain betrayed.

Explaining how Brexit should have been a time for celebration but had been hijacked by a Prime Minister and team of senior civil servants who never wanted Britain to leave the European Union in the first place, Mr Farage said: “What this deal does, is it takes us out of the European Union, namely we leave the treaties that we’ve signed up to which make us an EU member at 11 pm on March 29th next year.

“So I should be saying it is time to get the corks out of the champagne bottles, a huge celebration after 25 years of me fighting for us to be an independent country — but there is a very big ‘but’.

“Although we are leaving, [Theresa May] signed us up to a new series of arrangements which mean we’re going to be giving away up to £60 billion to remain trapped inside the EU’s customs union which effectively means they make all the laws for our businesses and industry… we’ll have to take laws without any say.

“This really is taxation without representation.”

Mr Farage also spoke on the complex arrangements created by Theresa May that would have the impact of keeping the UK in the EU indefinitely. He said these: “……effectively means we won’t be able to leave that customs union and take back full control at any point in the future unless the European Union agrees to it.

“It is rather like voluntarily going into prison for a period of time, and when you want to leave, [asking] ‘you won’t let me out, won’t you’! It’s complete madness, and I’ve branded this as the worst deal in history.

“The problem is we’re faced with Brexit in name only, we’re leaving the treaties but effectively we aren’t getting back control of our money, our laws, or our borders. As you can imagine, there is considerable anger brewing in the country.”

Theresa May is now engaging in an intense two-week media blitz to sell her “worst ever deal” agreement to the British people, a process which Mr Farage predicted would be loaded with falsehoods. He told the show: “Now, who knows exactly what tactics she’ll use, but I’m sure that every blackmail trick known to man is going to be used to try and get MPs to vote for the deal.

“She may even, if she feels desperate, go as far as to say ‘if you don’t vote for this deal’, we’ll force you to have a second referendum… this deal is actually worse than our current form of membership.”

Remarking that the Prime Minister and her team had totally failed to leverage the United Kingdom’s strong position at any point during the negotiations which led to endless giveaways and disadvantageous compromise, the Brexit leader said: “…a businessperson goes into a negotiation, and the other side knows that at any time they can get up, walk out of the room, and the deal is dead.

“And we never had that threat… there was a comment two weeks ago from German Chancellor Angela Merkel, and she said that Mrs May wants to stay part of Europe. How very telling that comment was.”

Delingpole: Britain’s Worst Ever Prime Minister May Yet Save Brexit https://t.co/uTrd2xIQqI

May’s campaign kicked off in earnest Monday morning, as the Prime Minister repeated claims she made on Sunday that the deal she was offering the country was the only option, and to reject it could mean Britain not leaving the European Union at all.

Telling would be rebels that they had better fall into line or it would be “back to square one”, the Prime Minister also reportedly is considering going head-to-head with Labour leader Jeremy Corbyn in a televised debate over Brexit. It is not clear what benefit this would have to the country, however, as both leaders voted against Brexit in the 2016 election, so no voices defending the will of the British people would be represented during the broadcast.