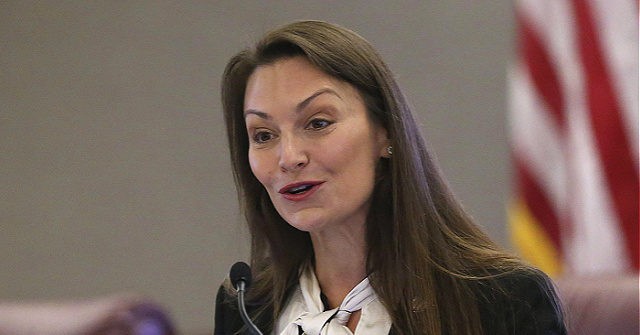 Host Melissa Ross asked Fried if she regretted her past comparisons, to which Fried said she did not and doubled down.

“Not at all,” she replied. “Growing up in Miami, and having neighbors that were Cubans, hearing stories of so many of our Floridians who have left dictatorships, and socialism, and communist countries, and coming here to the state of Florida for capitalism, for open opportunities to succeed. He is doing everything possible to take away power from local governments, taking away people’s ability to protest, making it harder to vote, talking about, you know, banning books. That’s what dictators do. Instead of listening and trying to govern with the people, he is trying to govern over the people.”

“You know, I’m sorry — I’m a student of history too,” Fried continued. “I saw the rise of Hitler. I’ve learned of those stories.”

Fried was interrupted by the host and asked if she was comparing DeSantis to Hitler.

Ross noted other states had militias, but Fried said those states had different motivations.

“The reason why this governor wants it is different than the other states that have been utilizing it for emergency purposes,” she said. “This governor is doing it for the sole purpose of the power and doing so to make fear and instill that and blame people for what is happening in their lives, blaming certain parts of our society and our culture. And that’s exactly what Hitler did to the Jews back, you know, during World War II.”

“[D]o I think that we’re going to get to this extent of Hitler’s power, of course not, but the rise of his power and what he did to scapegoat certain parts in especially the Jewish community in Germany and how he utilized taking going after the media, going after and scapegoating people and blaming people and putting fear and then taking over the military — that’s what this governor is doing,” Fried added. “And especially going back to, you know, all of my friends from the Latin American countries who left here for freedom — that’s not what this governor is doing.”