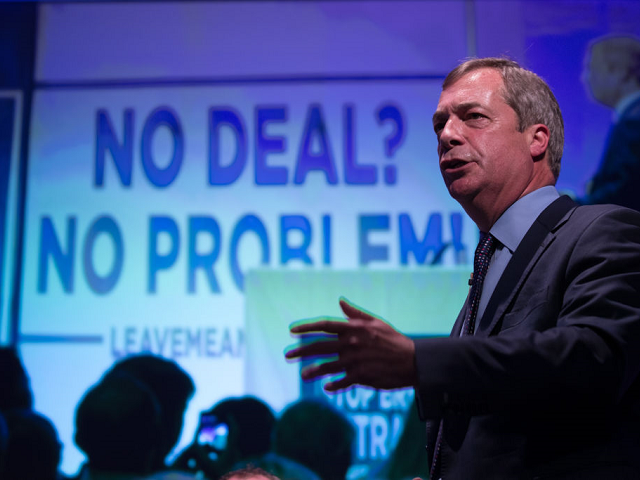 The betrayal of the greatest democratic exercise in British history is now complete with the UK moving to subject itself to taxation without representation and a Brexit in name only, Nigel Farage told Breitbart radio in his damning assessment of Theresa May’s proposed deal with the European Union.

Brexit leader Mr Farage gave his rundown on Theresa May’s deal with the European Union to Breitbart News Daily host Alex Marlow on Wednesday, when he said he was “absolutely incensed” over the news. Pressed to give his analysis of the situation, Mr Farage told the programme: “…this is awful! We have agreed to give the European Union something between 40 to 60 billion sterling ($50-75 billion).

“We have agreed with the European Union for the next few years to stay part of a customs union, which means all the rules and regulations that affect every aspect of industry and business will be the ones that are made by Europe — both the old ones and the new ones that are coming in. We have agreed that during that period we will have no say over those rules whatsoever, even if they introduce [new rules] that [are] very disadvantageous to British industry.

“Written into the small print, is an agreement that during this next phase when we negotiate a further trade deal, we will have to stay in regulatory alignment with EU law until 2030…. this should work with an American audience, this is taxation without representation!

“Let’s go back to the Boston tea party if you like. It will mean a continuance for the foreseeable future of open borders, we will not be taking back our fishing rights, we will not be able to negotiate trade deals with the U.S.A, it is Brexit in name only. ”

Mr Farage explained that Britain would be withdrawing from the treaty that makes it an official member of the EU in March 2019; under May’s plan this withdrawal would be immediately followed by entering a new treaty which would hold a wide variety of powers over the United Kingdom, which would leave the nation unable to command its own destiny.

He said: “[May’s deal] keeps us wrapped inside this straightjacket which means we’re not making our own laws, we’re not able to conduct trade deals with the U.S.A. or elsewhere, and we’re not able to take any competitive advantage.

“And I nearly forgot! Open borders and free movement will continue as well, we won’t get back the right to catch our own fish in our own waters. I’ve been warning for some time that the great Brexit betrayal had begun, but I can now say this morning that it is complete… It is the worst deal in history.”

All of the great and the good who were rolled out during the #EURef will be rolled out again in the coming weeks to try and get us to fall into line. We are clear – we will not be voting for this humiliation!

Illustrating how Brexit came from a giant exercise in democracy — a national referendum for the people of the United Kingdom to choose their own future either inside or out of the European Union — to this betrayal which would see the spirit of that vote ignored, Mr Farage explained: “Here’s the truth — two-thirds of the British cabinet voted remain and still believe in remain. That’s the point.

“Brexit was a victory of the little people… the trouble is the day after the referendum, the very people I’d fought against for 25 years were still in charge and that’s why we’ve got what we’ve got… it is a pretty bleak day.”

‘The Worst Deal in History’: The Brexiteer Verdict on May’s EU Deal https://t.co/tBzdmNazh1

Reflecting on the future direction of travel of both populists and globalists in the ongoing struggle to shape the future of the Western world, Mr Farage concluded: “What has happened with Brexit, Trump, and the Italian government is the European Union — the epicentre of the globalist project — in panic, they are going full pelt for a European army, a unified state, and eradication of nation-states and democracy. The battle is really on.”

The exact details of the “technical level” Brexit agreement struck by Theresa May has not yet been made officially public, but elements have been leaked to the Irish press before the PM was even able to show it to her own cabinet. Ulster MP, frequent collaborator with Mr Farage, and Brexiteer Sammy Wilson said Tuesday night the fact the news leaked too soon to the Irish press showed the “contempt” the EU negotiators hold Britain’s Prime Minister in.

Theresa May’s cabinet met at 1400 GMT Wednesday, and the outcome of that meeting is expected later in the afternoon.