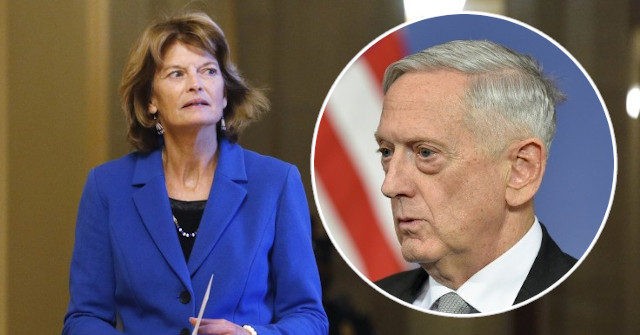 Murkowski, one of the Senate’s most left-leaning Republicans, made the comment while speaking to reporters on Capitol Hill. Asked whether she supports President Trump, the lawmaker replied,” “I am struggling with it [ and] I have struggled with it for a long time.”

These comments from Lisa Murkowski may not represent any significant shift among other GOP members, but I want to share them in full because they are significant. H/T @alizaslav for the full quotes. First question was about Mattis op-ed. pic.twitter.com/5bMtTAPtL9

On Wednesday, Mattis attacked President Trump in a statement to The Atlantic by accusing the president of violating the Constitution over the clearing of Lafayette Park on Monday and deploying the military to blunt riots in Washington, D.C.

The former Trump Cabinet official also claimed the president’s policies resemble “[t]he Nazi slogan for destroying us” and called for him to be “reject[ed].”

The Park Police said Tuesday that they cleared the police because some of the protesters “began throwing projectiles including bricks, frozen water bottles and caustic liquids.”

The president brought the military in to help calm Washington, DC, and the National Guard was deployed at the request of governors in 29 states.

The result, as of Wednesday morning, was that the nation’s streets were the “calmest in days,” the Associated Press reported.

Mattis resigned from the Trump administration in December 2018 over his disagreement with the president to withdraw U.S. troops from Syria.