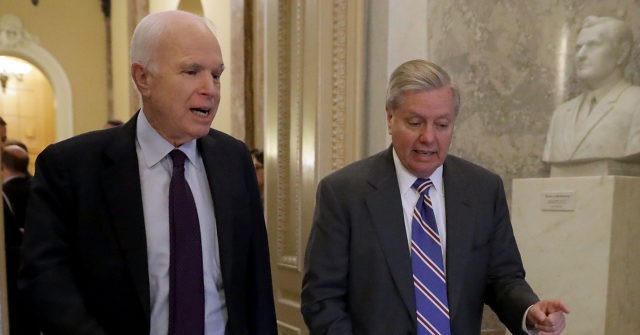 Speaking to reporters regarding his conversation with the POTUS over the weekend, Graham said, “Trump believes that it was the McCain people that spread this. He’s right. There were some McCain people that took a piece of garbage and tried to go after Trump after the election. But I told the president it was not John McCain.”

“If you realize, about three days ago, it came out that his main person gave to the FBI the fake news dossier,” Trump said on Friday. “It was a fake, it was a fraud, it was paid for by Hillary Clinton and the Democrats. They gave it to John McCain who gave it to the FBI for very evil purposes. That’s not good.”

According to Graham, this is not the case. When the late Arizona senator showed Graham the document, he recalled telling McCain to “turn it over to somebody whose job it is to find these things out.” He reiterated: “John McCain did not give it to anybody in the press. He turned it over to the FBI, and that’s exactly what he should have done. That’s what you should do.”

Despite standing up for his friend’s legacy, Graham is not trying to set himself up against Trump. “I like President Trump,” he said. “John McCain is one of my closest friends in life, not just in politics. I want President Trump to be successful. He’s been very good to me in the sense that he’s let me in his world.”