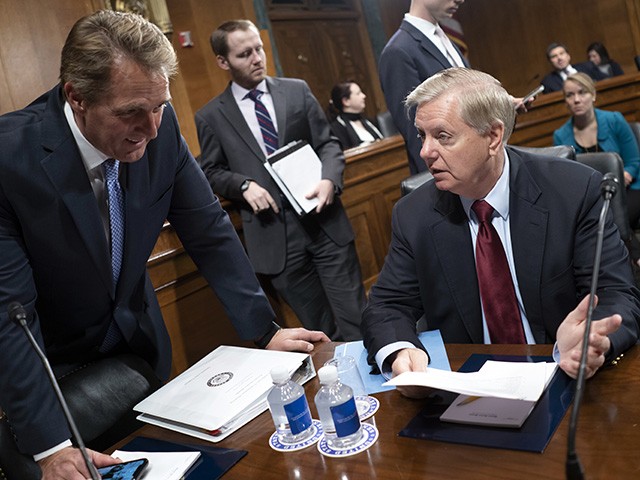 Thursday in an appearance on Fox News Channel’s “Hannity,” Sen. Lindsey Graham (R-SC) urged his colleague Sen. Jeff Flake (R-AZ) to consider the testimonies of Supreme Court associate justice Brett Kavanaugh’s accuser Christine Blasey Ford and Kavanaugh when making his final decision in whether to vote up or down for Kavanaugh’s confirmation.

Graham, who took a very vocal approach in protesting Senate Democrats’ tactics in opposing Kavanaugh’s confirmation earlier in the day during the hearing, suggested the evidence was on Kavanaugh’s side.

“I would just say, Jeff it is tough,” Graham said. “I don’t know what happened to Dr. Ford, but I’ve been a lawyer all my life. I used to do this for a living. Jeff, you couldn’t get a warrant. She can’t tell you where it happened, when it happened. It’s not he said, she said. It’s she said, and they said. All people named said it didn’t happen. And you can’t get the date or the time. My God, he went through a calendar of 1982. This is the most squared-away guy that I’ve met in my life. I was just honored to be in his presence. And I’ve never seen a man command a room like he did. I’ve never seen anybody more sincere. And I’ve never seen anybody more used and abused than Dr. Ford was by the Democrats.”