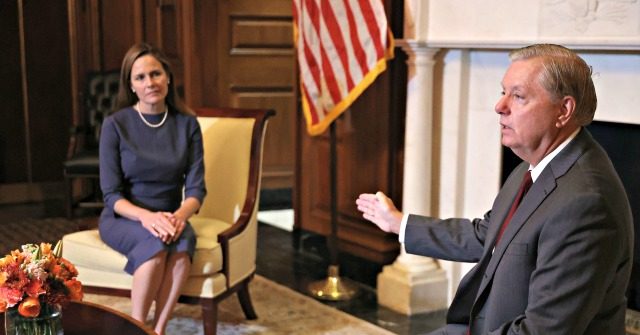 Graham said in a statement that the committee will hold hearings on Barrett’s nomination to serve as an Associate Justice on the Supreme Court starting on Monday, October 12, at 9:00 A.M., continuing through Thursday, October 15.

Over the last few months, I’ve been routinely tested for COVID-19, including testing negative last Saturday, but tonight my rapid antigen test came back positive. I will be following the recommendations of my doctor and will be self-isolating at home for 10 days and notifying those I’ve been in close contact with. Thankfully, I have no symptoms and I feel well. As we all know, COVID-19 is a very contagious and deadly virus, especially because many carriers are asymptomatic.

Lee said in a statement last week, “Unlike the test I took just a few days ago while visiting the White House, yesterday’s test came back positive. On advice of the Senate attending physician, I will remain isolated for the next 10 days.”

The South Carolina Republican added that he will allow any senator to participate in the hearings virtually if they wish.

I feel fine and look forward to the hearing for Judge Amy Coney Barrett on Oct. 12.

Any Senator who wants to participate virtually will be allowed to do so.

Graham said also said on Monday that Trump continues to recover from the coronavirus and that he is “excited” about the prospect of confirming Judge Barrett to the Supreme Court.

Graham said, “Just spoke with President @realDonaldTrump and he sounds terrific — very engaged and ready to get back to work!”