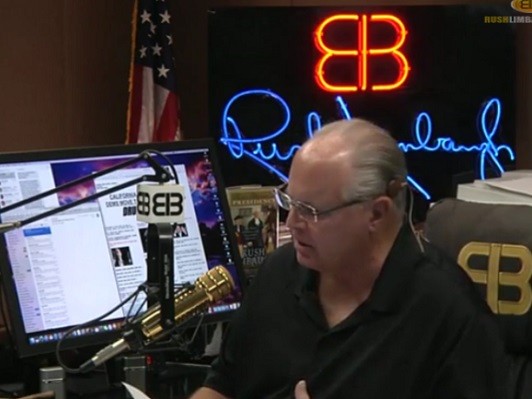 Tuesday on his nationally syndicated radio show, conservative talker Rush Limbaugh led off his show discussing Sen. Kamala Harris (D-CA), a topic he would take on later in his program.

While teasing it, he noted that his friends, presumably Republican-leaning, were concerned about Harris’ 2020 run for the Democratic presidential nomination. While noting Harris’ prior association with former San Francisco Mayor Willie Brown, Limbaugh posed the question: “What’s the difference between Stormy Daniels and Kamala Harris?”

I’m gonna just tell you, based on the stuff that my friends are sending me, there are a lot of people on our side scared to death of Kamala Harris. They are sending me things about things about Kamala Harris and telling me what they don’t like about her and what we ought to all be worried about. So you learn to spot these things.

Now, largely that’s a creation of media. It’s so frustrating. My closest friends, I try, I tell ’em, “Take what you watch and what you see on CNN, MSNBC, New York Times, whatever, and just ignore it, try ignoring it or try not believing it, or try understanding that it’s agenda-driven.” These are smart people. It’s what depresses me about the effort to educate people on how to deal with the media. If my own friends become profoundly influenced by it, I mean, why send me stuff on Kamala Harris? ‘Cause she’s the only one in the news right now. Well, Howard Schultz, but that’s a little bit different story.

When somebody else announces and has a rally then they’ll go get big news, but it’s obvious the media right now is all into Kamala Harris, so I have a Kamala Harris Stack coming up. In fact, there’s a lot of stuff I need to do here before we get to the politics of the day. Because if I don’t do it here at the beginning of the program, I won’t end up getting to it because, of course, it will continue to lose priority status as the program unfolds.

I’m sitting here, I’m trying to figure out what’s the difference between Stormy Daniels and Kamala Harris? Well, I mean, stop and think about it. What is the real difference? One difference is that she’s not trying to shut Willie Brown up. Or anybody else.