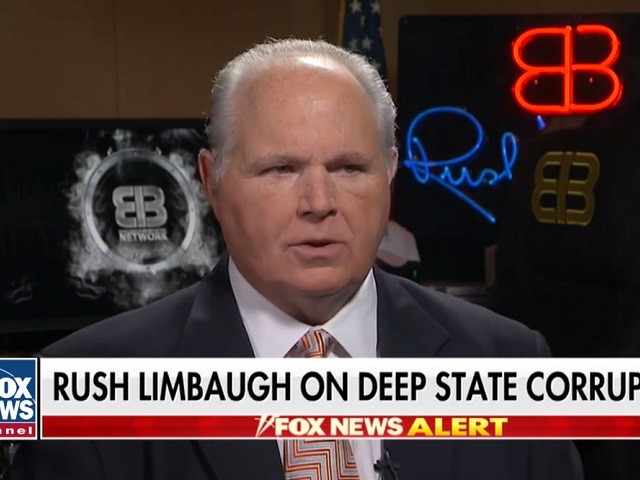 Thursday on Fox News Channel’s “Hannity,” conservative talker Rush Limbaugh emphasized the importance of the Trump administration getting the proper response to the Saudi Arabian government for the alleged murder of Jamal Khashoggi at a Turkish consulate given the Saudi royal family’s influence over Islam.

Limbaugh said explained if President Donald Trump went too far placating the Saudis, it might appear it was done so for financial reasons, and that would give Democrats an opportunity to attack him.

HANNITY: Let me ask you about this Khashoggi. You saw Tom Friedman today.

LIMBAUGH: Yes. Well, he made, Friedman made a good point about this.

LIMBAUGH: And I got to acknowledge good points when they are made. I think this is a precarious time for the Trump administration because the left is trying to use this Khashoggi death, tie it to Trump. They are trying to get Trump to blame for everything.

HANNITY: If he cured cancer, Rush, they would still be mad at him.

LIMBAUGH: For destroying the livelihood of how many people in the medical field.

HANNITY: They would find a reason.

LIMBAUGH: The thing about Mohammed bin Salman, the thing he was doing that had everybody really excited, the important thing he was doing, was supposedly reforming militant Islam. He was getting rid of the Wahhabi influence, which is where terrorist Islam comes from.

The Saudi royal family is Islam. They are in charge of Mecca and Medina, and they determine what Islam is going to be. If it’s going to be terrorist Islam, Wahhabi Islam the royal family makes it happen. Well, Bin Salman is tired of being dependent on petrol dollars. He wants all this investment from Hollywood to tech. He wants to build a new city and, in the process, he’s got to reform it — make it looks like he let women drive, he’s going to get rid of violent militant Islam and deemphasized Wahhabi.

And now that’s all good. That’s probably one of the most important things the Saudi royal family can do for the world, is to deemphasize the militant aspects of Islam. Then this Khashoggi things comes along, and it looks like there isn’t any real reform. You criticize the state, and they kill you, so forth.

It’s a — I hope Trump and his team do the right on this because they are laying in wait. If he goes–

LIMBAUGH: – if he goes too far in what they think is exonerating the Saudis for oil deals or business deals or arms deals that are important to America.

HANNITY: Can I — didn’t the Clintons take $25 million from the Saudis for their foundation?

LIMBAUGH: Absolutely, it is a dual — it’s a two-way street.

HANNITY: Where was the Benghazi outrage?

HANNITY: Except for conservatives.

LIMBAUGH: I asked that the other day.

LIMBAUGH: Where’s all the concern for four dead Americans in Benghazi? But I just want to tell you one thing here, folks, they’re trying to tell you that there is recorded evidence of the murder and the dismemberment and the dispatchment of the body because it was recorded on his Apple Watch. Khashoggi’s Apple Watch.

I’m here to tell you, that is not technological possibly — technologically possible. There are three ways a watch can transmit data. LTE, which is cellular, Bluetooth, and Wi-Fi. Apple has not activated LTE in Turkey. That’s the longest range. The only way this guy had it to transmit data from his watch to his phone would be Bluetooth. His car, his wife south — fiance, it really, I don’t think it’s possible from them to be a recording of what happened.