Leftist Canadian Prime Minister Justin Trudeau faced jeers and insults in Parliament on Tuesday as he once again faced questions regarding his derision towards citizens who oppose civil rights violations tied to the Chinese coronavirus pandemic.

Trudeau had a contentious week in Parliament after vanishing from the public eye to an undisclosed site in late January, allegedly to recover from a Chinese coronavirus infection himself. He returned on Monday to an emergency session discussing the “Freedom Convoy,” a series of protests led by truckers demanding an end to vaccine and mask mandates, business lockdowns, and travel restrictions that the Trudeau government has imposed in an attempt to contain the pandemic.

The largest iteration of the convoy is currently in downtown Ottawa, not far from Parliament. The city has been flooded by trucks for nearly two weeks and attracted thousands of protesters – most of whom, according to police, have been peaceful. Reports on the ground have revealed the development of a community among the protesters including distribution of free food, drinks, and other supplies and a generally positive party atmosphere, save for instances of police brutality.

Trudeau has repeatedly insisted he would not listen to any calls for lifting the mandates and restoring normal life to Canada. He has accused the protesters of racism and misogyny and equated them with Nazis in his statements in Parliament on Monday.

The next day, he once again faced calls to meet with opposition leaders and bring an end to the onerous mandate regime currently in place. The interim leader of the Conservative Party, Candice Bergen, asked Trudeau if he would consider ending restrictions once again. 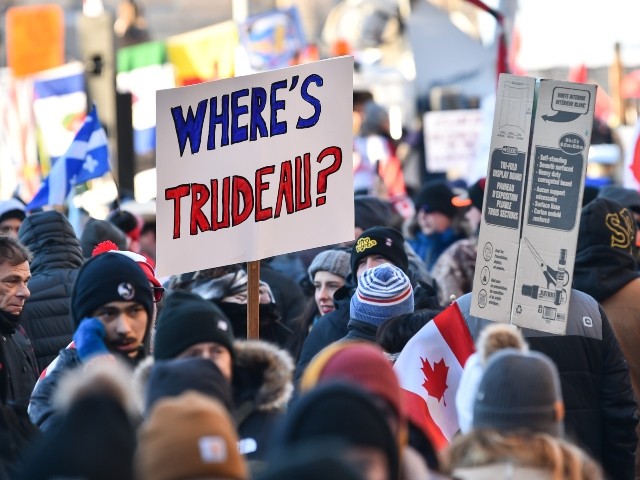 OTTAWA, ON – FEBRUARY 05: A “Where’s Trudeau” sign is seen near Parliament Hill on February 5, 2022 in Ottawa, Canada. Truckers continue their rally over the weekend near Parliament Hill in hopes of pressuring the government to roll back COVID-19 public health regulations and mandates. (Photo by Minas Panagiotakis/Getty Images)

Bergen again asked him to answer the question, but upon his second attempt, the jeering became so loud that he stopped abruptly and sat down to wait for it to end. Amid the shouting, one voice could be heard saying, “Let him answer, he’s not good at it!”

Speaker of the House of Commons Anthony Rota admonished the chamber and confirmed that the shouting was, indeed, jeers.

“The honorable leader of the opposition asked a question and she’s trying to hear, but she can’t hear it above all the heckling and shouting that’s going on,” Rota scolded.

The speaker did not succeed in silencing the shouting entirely but diminished it enough for Trudeau to finish his response, which was nearly identical to his first statement.

Trudeau and Bergen have engaged in several testy exchanges since she assumed the leadership of the Conservative Party following the ouster of predecessor Erin O’Toole last week. On Monday, Bergen pressed Trudeau for an apology for his invective against those who choose not to receive a Chinese coronavirus vaccine.

Trudeau responded by associating the protesters with Nazis. 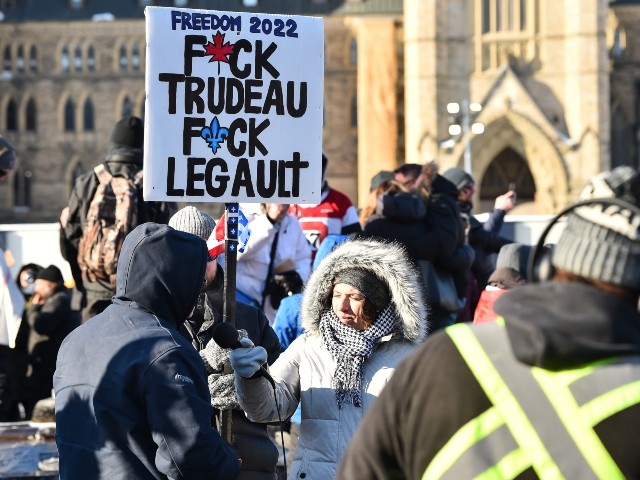 “A few people shouting and waving swastikas does not define who Canadians are,” Trudeau said.

The prime minister has repeatedly referred to protesters, and any individual who does not agree with mandates regardless of participation, in similar terms. In remarks from his undisclosed location last week, Trudeau accused the protesters of wearing “tinfoil hats” and compared them unfavorably to the violent riots fueled by the “Black Lives Matter” movement in 2020. Trudeau met with members of that movement and kneeled before them at the time.

“I have attended protests and rallies in the past when I agree with the goals, [and] when I supported the people expressing their concerns and their issues. Black Lives Matter is an excellent example of that,” Trudeau told reporters. “But I have also chosen to not go anywhere near protests that have expressed hateful rhetoric, violence towards fellow citizens.”

“The concerns expressed by a few people gathered in Ottawa, right now, are not new, not surprising, are heard, but are a continuation of what we’ve unfortunately seen in disinformation and misinformation,” Trudeau asserted, equating demonstrators’ concerns with “online conspiracy theorists, about microchips, about God knows what else that go with tinfoil hats.”

Trudeau’s long absence amid what opponents of the protest movement have called a crisis and occupation has prompted criticism of the prime minister from his left, accusing him of leaving a “leadership void” that has allowed the protests to grow.