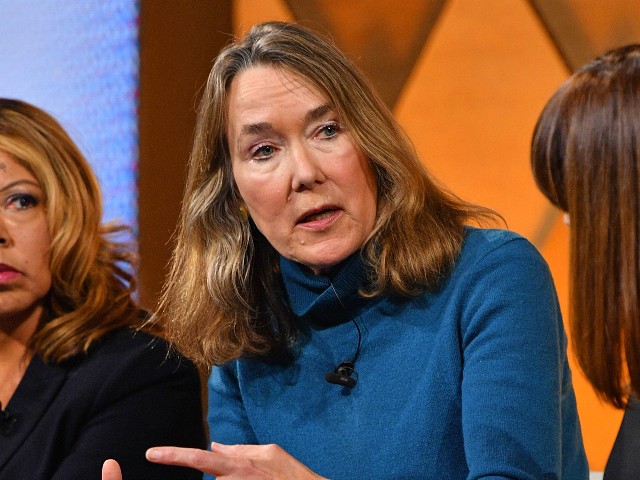 Leslie Cockburn, the Democratic candidate for Virginia’s fifth congressional district, said during a speech in Virginia on Sunday that President Donald Trump has “made it acceptable to be a racist again.”

Cockburn said at a speech in the fifth district of Virginia that President Trump has opened “Pandora’s box,” which according to her, has made it acceptable to be racist in American again.

“It’s a matter of race. This is an African-American community, and it brings up all of the questions of what has happened since Trump has opened his pandora’s box and made it acceptable to be a racist again,” Cockburn said.

“This is something that we are fighting, and I believe that, in Congress, is a great way to really attack the institutional racism we see all around us and I shall be doing that, believe me,” Cockburn said, to which the crowd erupted in thunderous applause.

Cockburn’s latest statement is not the first time she has accused Republicans and Americans of racism.

Cockburn said, “My opponent Denver Riggleman, running mate of Corey Stewart, was caught on camera campaigning with a white supremacist. Now he has been exposed as a devotee of Bigfoot erotica. This is not what we need on Capitol Hill.”

My opponent Denver Riggleman, running mate of Corey Stewart, was caught on camera campaigning with a white supremacist. Now he has been exposed as a devotee of Bigfoot erotica. This is not what we need on Capitol Hill. pic.twitter.com/0eBvxFd6sG

Riggleman, who has promised to join the conservative House Freedom Caucus should he get elected to Congress, has rebuked the claims in an interview with Breitbart News.

Riggleman told Breitbart News in July, “The Democrats automatically knee-jerk to white supremacy, I’ve only been in the race eight weeks, so they don’t know what to do with me, so they conflate Bigfoot erotica with white supremacy, which is disgraceful.”

“It’s like, by the way, he might be a white supremacist because he’s a Republican. Let’s just throw that out with the bigfoot erotica story,” Riggleman said.

Riggleman also suggested in July that Cockburn may have decided to attack him for allegedly associating with “white supremacists” to distract from her own controversial opinions.

In the early 1990s, Cockburn co-authored Dangerous Liaison, which alleges that Jewish power brokers lobby American and global institutions for the benefit of Israel.

Jay Ipsen, a co-founder of the Virginia Holocaust Museum, condemned Cockburn in a statement in May.

“I don’t know to which hate group she was trying to cater with her book, but her [Cockburn’s] claims are wildly inaccurate,” Ipsen, a Holocaust survivor, charged.

Speaking of the book, Riggleman said, “It’s very anti-Israel, which is why you see a lot of pro-Israel groups can’t stand that she’s running for office. I think given her own anti-Israel views — she’s trying to throw out smokescreens to distract everyone from her own politics.”