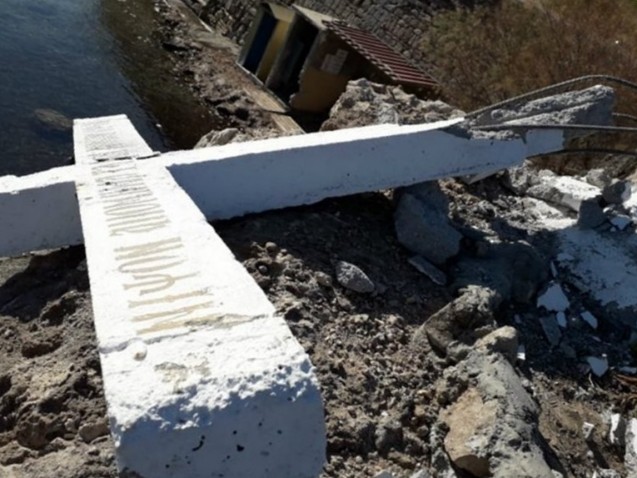 Residents on the Greek island of Lesbos have reacted with anger to the destruction of a large stone cross by actors unknown, just weeks after an open borders-backing NGO demanded its removal on the basis it promoted “hate” against migrants.

‘Coexistence and Communication in the Aegean’ had filed a request with authorities to get the beachside cross taken down last month, citing the “inappropriateness of there being a religious symbol near swimmers” as well as claiming the Christian symbol had been “turned into a tool of aspiring crusaders”, it is claimed.

Residents discovered on Monday that, at some point during the night, the cross had been destroyed, reports Greek daily newspaper Ta Nea.

Local-interest outlet Lesbos News claims it has been inundated with messages and phone calls from locals wanting to raise money to erect a new cross in the old one’s place on Apelli Beach, under the Fortress of Mytilene, and who said they hoped to see intervention on the issue from the Greek Orthodox Church.

In its letter to the island’s Harbour Minister and mayor reproduced by Greek news website Newsbeast, the ‘Coexistence’ NGO had claimed that the “unsightly” cross was erected as a “symbol of … racism and intolerance” intended to prevent migrants from using the beach.

Greek news portal Skai said there has been “strong protest” from Lesbos residents over the destruction of the cross, reporting that plans for its reconstruction were underway.