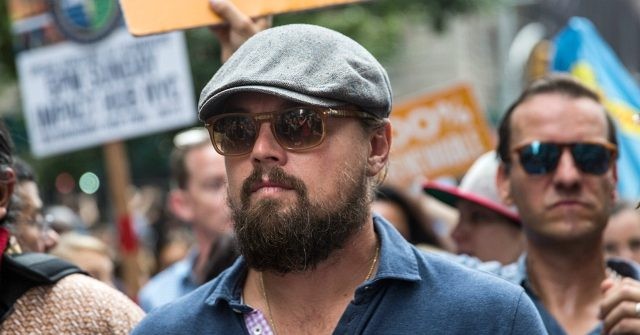 Actor and climate activist Leonardo DiCaprio is creating a non-profit, with the help of billionaire investors, aimed at funding campaigns and films to help activists sell the climate change agenda.

The Once Upon a Time in Hollywood star is reportedly teaming up with fellow investors Laurene Powell Jobs and Brian Sheth to launch the non-profit, Earth Alliance. While it has been described as an “environmental powerhouse charged with tackling climate change and the loss of biodiversity,” the effort appears to resemble a political siphon, expediting the left’s climate change narrative to a number of political avenues at both the grassroots and Hollywood-D.C. level.

Earth Alliance said it will provide grants, educational opportunities, and fund campaigns and films, as well as work with grassroots organizations and individuals in places most affected by biodiversity loss and climate change.

The new organization, Earth Alliance, “will work globally to protect ecosystems and wildlife, ensure climate justice, support renewable energy and secure indigenous rights to the benefit of all life on Earth,” according to a statement.

In the statement, DiCaprio called Earth Alliance a “new larger, nimble platform that shares resources and expertise while identifying the best programs to drive real change around the planet.”

“I am incredibly proud of the impact my foundation has had over the last 20 years by supporting nearly 200 projects from 132 different organizations across climate science, marine and land conservation, critical species preservation and indigenous rights,” DiCaprio said of his Leonardo DiCaprio Foundation, according to Variety.

Today marks the next step in the evolution of LDF as it fully merges under the new Earth Alliance management and grant-making framework. Laurene and Brian are incredible civic leaders who share my passion and understanding of the urgency and scale of the challenges we face. I am proud to partner with them to form this new larger, nimble platform that shares resources and expertise while identifying the best programs to drive real change around the planet.

While DiCaprio has made efforts to fight climate change, he’s simultaneously lived a lavish lifestyle partying on carbon-pumping yachts, flying around the world on private jets, and owns at least a half-dozen high-end properties from California to Belize to New York.

In 2016, DiCaprio took a private jet from Cannes to New York for the Riverkeeper Fishermen’s Ball at Chelsea Piers to accept an environmental reward. Just 24 hours later, he traveled to France to give a speech at the Cinema Against AIDS gala. Critics said it was an extremely hypocritical move, pointing to the fact that he expanded his carbon footprint by 8,000 miles in a three-day span – far greater than the carbon footprint of the average individuals he routinely lectures.

Before to President Trump’s 2016 victory, DiCaprio warned that the U.S. could not elect a president who does not believe in anthropogenic climate change.

“We should not have a candidate who doesn’t believe in modern science to be leading our country,” he said at the time. “Climate change is one of the most concerning issues facing all humanity and the United States needs to do its part.”

Speaking at a Yale University climate conference in 2017, DiCaprio declared that the U.S. should not elect people who reject the climate change narrative touted by the political left.

“We should not have people in office who do not believe in facts and truths and modern science that are able to manipulate and risk the entire future of this entire generation,” he told former Secretary of State John Kerry at the conference.

Critics also slammed the Oscar-winner after a video surfaced in 2018, showing DiCaprio flying to Coachella with his friends on a private jet, seemingly unconcerned about the environmental impact they were making.