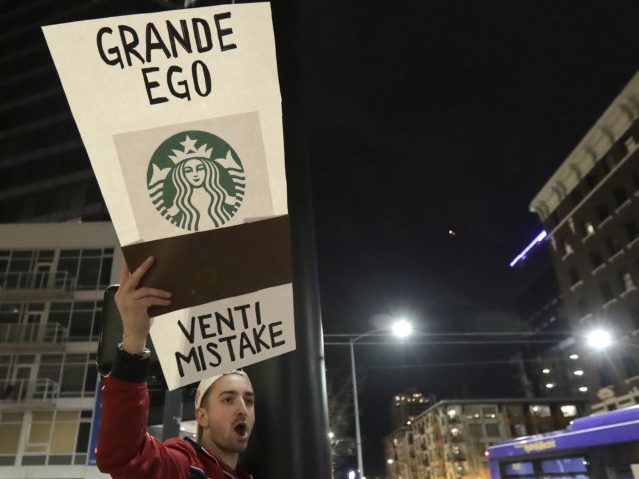 Howard Schultz, the former Starbucks CEO and self-made billionaire, got an icy reception in his hometown of Seattle on Thursday after announcing his possible bid as an Independent candidate in the 2020 presidential election.

“Grande ego” and ‘Venti mistake’ were protesters’ clever play on words outside of a downtown Seattle theater where Schultz was set to appear to promote his new book, “From the Ground Up: A Journey to Reimagine the Promise of America,” which tells his rags to riches story.

Several dozen protesters gathered outside a downtown theater before Schultz appeared to promote his new book. They included Democrats who fret his candidacy would hand President Donald Trump another term, and green-and-gold-bedecked basketball fans who haven’t forgiven him for selling the Seattle SuperSonics to a group that moved the team to Oklahoma City more than a decade ago.

“The way he dealt with the Sonics shows a huge fault in his character,” protester Farheen Siddiqui said. “He acted like a child who was not getting his way.”

Schultz, 65, has not decided whether or not to throw his hat in the ring “but the reaction from prominent Democrats has been swift,” AP reported.

“The party chairwoman in Washington state, top advisers to former President Barack Obama and the most powerful political action committee in Democratic politics, are among those who have criticized him, saying an independent bid would likely split the opposition to Trump and make his re-election more likely,” AP reported.

AP noted that 92 percent of voters opposed Trump in 2016. One of them, Chris Petzold, a Democratic activist, organized the anti-Schultz protest.

“Now is not the time to risk getting another four years with Donald Trump as president,” Petzold said. “If you want to fix it, why not fix it from within the system, instead of being your arrogant billionaire self? He’s just buying his way into this.”

In an opinion piece published Wednesday in The Seattle Times, Schultz acknowledged that he has a “complicated” relationship with Seattle, a city he first fell in love with during a visit to Pike Place Market in 1981. It’s the city where he grew a small coffee-roasting company into an inescapable global chain, where he and his wife raised their two children, and where the couple still lives.

Along the way he made Starbucks one of the first U.S. companies to offer stock options and health insurance even to part-time employees; more recently, it partnered with Arizona State University to cover tuition for workers who want to earn their bachelor’s degrees online.

In the commentary Schultz apologized for selling the Sonics, calling it “the biggest regret of my professional life. … I do not expect my actions to be forgiven or forgotten.”

Democrats also are critical of Schultz for opposing the now-in-place $15 minimum wage in Seattle and being against arbitrarily taxing the rich — an increasingly popular talking point for the left, including already declared presidential candidate Sen. Elizabeth Warren (D-MA).