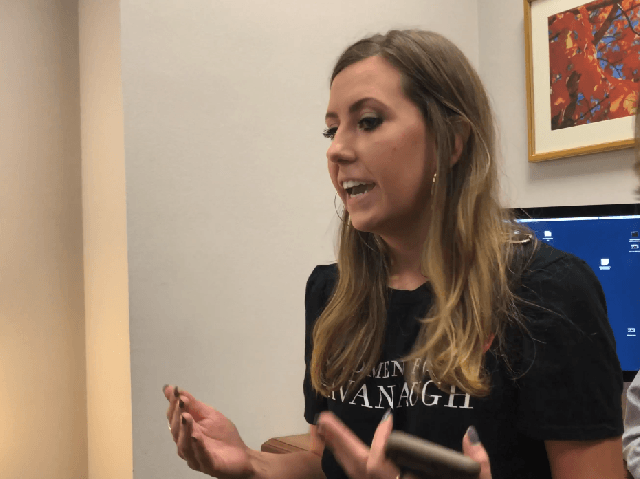 Annabelle Rutledge of the conservative Christian group Concerned Women for America came to Sen. Susan Collins’s (R-ME) office Friday to tell her story of sexual assault in the hours before the key Senator announced her decision with regard to Judge Brett Kavanaugh’s confirmation.

Also present in Collins’ office were anti-Kavanaugh protesters there to tell their own stories and urge Collins — in vain it would later prove — not to vote against Judge Kavanaugh.

“This story isn’t only for a certain set of people,” Rutledge said to an anti-Kavanaugh activist. “It’s not only for progressives, it’s not only for Democrats, it’s for every single person. I’d like to join my voice and share my story and I am here today obviously in support of Judge Kavanaugh.”

“I am a woman. I also have been sexually assaulted,” Rutledge, who wore a Women for Kavanaugh shirt, explained. “And I care about each one of you guys, and I say that from the bottom of my heart, but I also know something else. And that’s that we can’t take the pain that we have from each of these experiences and put it on one man.”

Rutledge rejected the anti-Kavanaugh protesters’ notion that voting for Kavanaugh after he had been accused of misconduct was a vote against all victims of sex crime. “That’s just not true. You can’t take the face of the people who have hurt you and put it on one–,” Rutledge began, at which point an anti-Kavanaugh woman raised her hand and said, “I’m just gonna stop you right there.”

As Rutledge spoke her peace, supporting Judge Kavanaugh, other protesters interjected, “he’s a criminal,” “he’s disgusting,” and “he’s a liar!”

“Excuse me, I’m a woman, but I’m also a sister. I’m a daughter. I am a niece. I am a sister to four brothers. I am an aunt to three nephews. And it is extremely terrifying to me that one day someone could have a woman come and accuse them of something–,” Rutledge began to explain.

“Not just one,” “it’s not just one woman,” “they won’t let them investigate,” and “it’s a sham,” the protesters shouted in response.