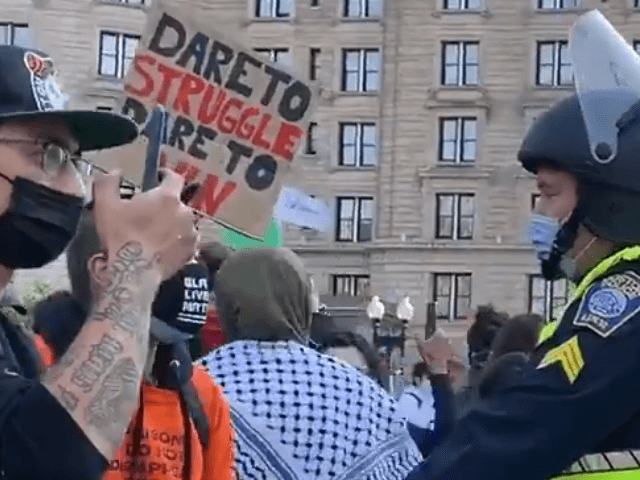 A large group of anti-Trump leftists turned violent against Boston police officers at a pro-Trump “Anti-Democrat Violence” rally in Boston on Sunday. They later burned a U.S. flag and an image of President Donald Trump.

A group of about 50 members of the pro-Trump “Super Happy Fun America” group gathered in front of the Boston Public Library on Sunday to protest “Democrat violence,” according to the Boston Herald.  They were outnumbered nearly three-to-one by anti-Trump counterprotesters who eventually turned violent.

Boston police attempted to keep the groups separated with a metal barricade but the leftists eventually removed the barriers.

This is getting intense. Opposing protests in Boston. One group pulling barriers away from the group supporting Trump for reelection. Police trying to keep counter protesters away from what’s supposed to be a peaceful protest @boston25 pic.twitter.com/OEkYvH2jAS

As police tried to keep the groups separated, the leftist group apparently attacked the police leading to a short skirmish and the arrest of two people, the Boston newspaper reported.

“This is a peaceful protest against Democrat violence, and they’re proving our point,” event organizer Samson Racioppi of Super Happy Fun America told the Herald reporter. “The violence is across the street.”

Yesterday, antifa & left-wing protesters in Boston burned a Trump flag and one person poured fake blood on himself in occult-like ceremony. Video by @FordFischer: pic.twitter.com/iL8904UhiC

“The Trump/Pence regime is a fascist regime that needs to be driven from power,” counterprotester Stan Lawrence of Refuse Fascism told the reporter. “I think the people across the street are one step away from the people who murdered Heather Heyer in Charlottesville.”

Left-wing rioters fought police in Boston yesterday at a protest against a pro-Trump group. Video by @FordFischer: pic.twitter.com/a7SYFhh2Ow

Solidarity Against Hate-Boston organized the so-called “Kick Fascists Out of Boston” counterprotest, NBC10 in Boston reported.

“Donald Trump flags held by supporters of the “law and order” touting president clashed with those who want police abolished,” the local NBC affiliate reported. “As both sides marched to the beat of their own drum, it was clear they, like many Americans in these tense times, stand more divided than together.”

At least 2 arrests made during dueling protests in Boston https://t.co/l6i7o15Hug

Pro-Trump protester John Hugo told WCVB ABC5 reporters, “We’re here to have a peaceful protest against Democrat violence. As you see, the Democrats are here in force … to cause violence and prevent our free speech.”

Police eventually had to escort the pro-Trump activists away from the area for safety reasons.