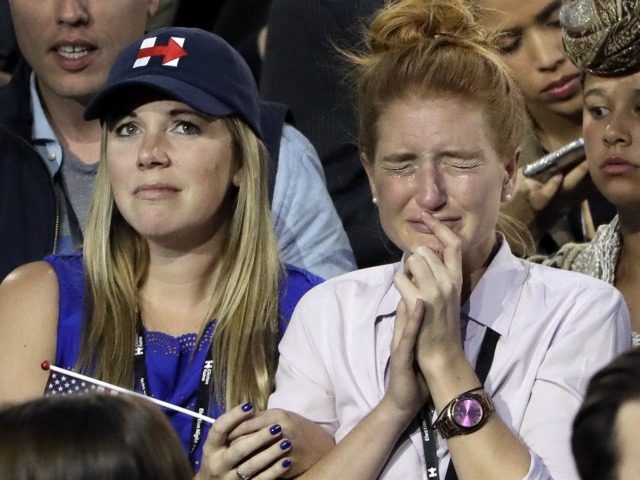 Leftists are worried about a repeat of President Donald Trump’s election in 2016, when “experts” said the shock of his election caused Post-Traumatic Stress Disorder (PTSD) in those certain Hillary Clinton would win.

The anxiety exists despite that fact that — just like the Hillary prediction in 2016 — the media and pundits are predicting a “blue wave” that would put the Democrats back in control of the House of Representatives.

Politico is one of the leftist media predicting the Democrats’ victory while warning that people could be further traumatized.

On the eve of the midterms, President Donald Trump’s approval is falling, young voters are energized, and Republicans look poised to lose their House majority.

Haunted by memories of 2016, liberals around the country are riven with anxiety in the campaign’s homestretch. They’re suspicious of favorable polls and making election night contingency plans in case their worst fears come true. Some report literal nightmares about a Democratic wipeout.

When the idea of losing was suggested to Nadeam Elshami, who was chief of staff for House Minority Leader Nancy Pelosi (D-CA), his reaction was emotional.

“Stop it!” Elshami told Politico and said he has even dreamed about Democrats winning.

Politico cited a study published last month in the Journal of American College Health that said one-quarter of college students had faced “clinically significant” trauma symptoms after the 2016 election.

The news outlet also said that Democrats at Vassar College in upstate New York are spending their election night gathering at a different location because revisiting where they were in 2016 “would be too upsetting for some students, according to a member of the group.”

“At Brown University in Rhode Island, the College Democrats have taken the same precaution after experiencing a ‘collective flashback’ to Trump’s victory during a discussion of election night planning,” Politico reported.

“For many traumatized Democrats, heading into Tuesday feels like flying again after surviving a plane crash,” Politico reported and described Trump’s tenure as “two years of his megalomaniacal rule.”

Anzalone said leftists who are “haunted” by 2016 are hoping for an “exorcism” on Tuesday.

But what if Democrats aren’t winners on Tuesday, Politico asked, revealing unwittingly another member of the leftist mob.

“That made me want to say, ‘Fuck you,’” Anzalone said.