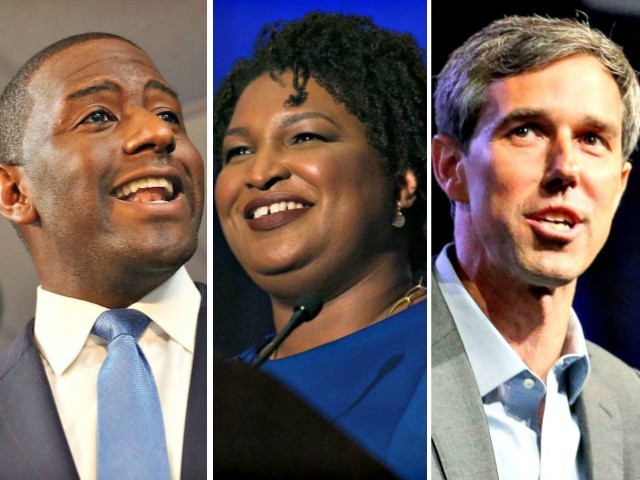 She also tweeted screenshots of the percentages, which were broken down by race and gender.

In contrast, an overwhelming majority of black men and women voted for Abrams, O’Rourke, and Gillum. Abrams and Gillum are black, while O’Rourke is white.

There was, however, no mention that Georgia, Texas, and Florida are red states that overwhelmingly voted Republican in the 2016 presidential race. There was also no mention that Cruz is actually Latino.

Eltahawy tweeted that white women were voting GOP “against their own interests” and allying “with white supremacist patriarchy.”

“They are loyal to the party, even if political moderates & those who identify as progressive Left have concluded that GOP doesn’t respect women’s voices and bodies,” she asserted, despite the numerous liberal Hollywood and media figures who have been taken down by the #MeToo movement.

She was not alone in attacking “white women” for their disappointing losses in red states.

White women helped elect trump and tonight they helped elect DeSantis and Cruz. Time to stop pretending like they aren’t complicit in white supremacy because they cling to their victimhood

Guys that’s not how you spell “white women” https://t.co/WtvktJPSXk

CALLING-IN WHITE PEOPLE especially white women. We must, must do better ya’ll. We must dust off the indoctrination of white supremacy and truly overstand our humanity is at stake until we SHOW the FUCK UP and work toward a vision of true freedom and Liberation for all people. pic.twitter.com/5gf8SAo1ei

Even women on the left who tried to argue that not “all white women are bigots” were attacked:

Absolutely shocking how many people are clogging my mentions with assumptions about my ethnicity, accusations of white supremacy and ad hom insults because I pointed out a basic inaccuracy in the line of thinking that all white women are bigots. Get your shit together, people.

The conversation left some pointing out the inherent racism in leftists assuming one should vote by their race:

Seeing people get so upset at white women for voting a particular way is quite interesting… it’s racist, but it’s interesting.

It goes to show that if you are not white and male, you are expected vote Democrat and anything outside of that is a deviation and intolerable.

Turning Point’s Candace Owens, who has fought against the idea that one must vote Democrat if they are black and that black voters should not be taken for granted, celebrated Gillum’s loss.

“You win with BETTER IDEAS. Not BLACKER SKIN,” she tweeted.

Andrew Gillum just found out that the race card is no longer readily accepted in America.

You win with BETTER IDEAS. Not BLACKER SKIN.