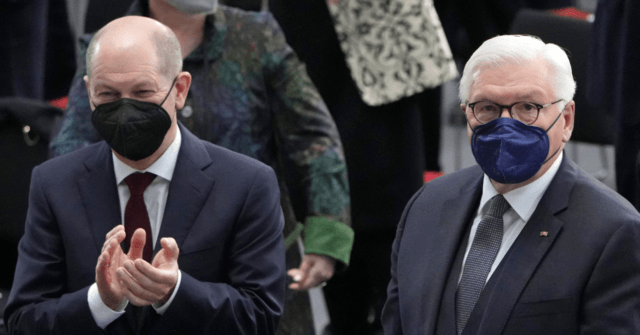 BERLIN (AP) – German President Frank-Walter Steinmeier was re-elected for a second term of five years by a special parliamentary assembly on Sunday and vowed to heal the wounds left by the coronavirus and fight the enemies of democracy.

The president was elected with a big majority by a special assembly made up of the members of parliament’s lower house and representatives of Germany’s 16 states.

Steinmeier had been endorsed by most mainstream political parties ahead of the election for the largely ceremonial head of state.

“My responsibility is for all the people who live in our country. Non-partisan, yes – but I am not neutral when it comes to the cause of democracy. Whoever fights for democracy will have me on his side. Whoever attacks it will have me as an opponent,” Steinmeier said in a speech to the special assembly after accepting his election.

In reaction to the escalating crisis on the border of Ukraine where Russia has massed well over 100,000 troops, Steinmeier warned that “we are in the midst of the danger of a military conflict, a war in Eastern Europe – Russia bears the responsibility for this.”

“Russia’s troop buildup cannot be misunderstood. It is a threat to Ukraine and it is supposed to be one,” he added. “But the people there have a right to live without fear and threat, to self-determination and sovereignty. No country in the world has the right to destroy that – and whoever tries to do so, we will answer you decisively.”

The re-elected president vowed that he would continue to work on strengthening democracy in Germany and help take away fears of the future, giving the country’s citizens the confidence to handle the challenges ahead. He also vowed to help heal wounds created by the coronavirus pandemic.

But, Steinmeier stressed, “the decisive breakthrough in the fight against the pandemic, the development of the vaccine in record time – that was achieved here, in free science, thanks to brilliant researchers and courageous entrepreneurs … in Germany, with our partners in Europe and the USA.”

German President Declares There are ‘No Native Germans, We are a Nation of Immigrants’ https://t.co/5hURPEH4hR

German Chancellor Olaf Scholz congratulated Steinmeier, saying that “he has shown that he is in a position to talk directly to the people, to ensure solidarity in our society, but also to provide guidance.”

“That’s what we need right now with all the challenges we´re experiencing with regard to the pandemic, but also, of course, with regard to securing peace in Europe. He is the right president at exactly the right time,” Scholz said.

Germany’s president has little executive power but is considered an important moral authority. After a messy parliamentary election result in 2017, Steinmeier helped prod politicians to form a new coalition government rather than holding out for a new vote.