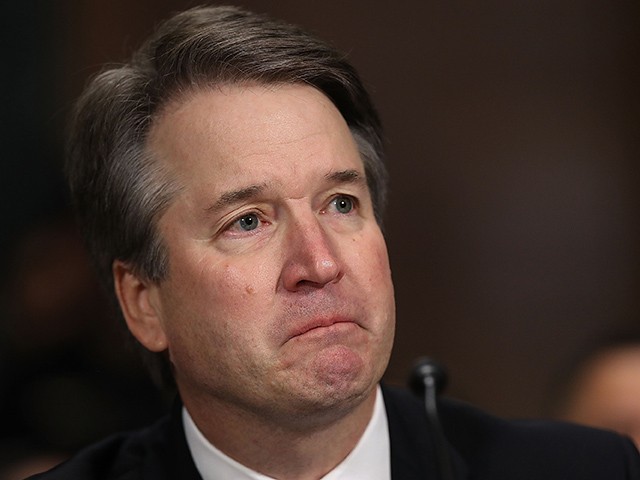 Kavanaugh’s emotional opening statement condemned Democratic lawmakers for a “search and destroy” campaign against his nomination, choking up and weeping while talking about the effect of the salacious allegations on his family.

Various Twitter-endorsed Verified accounts said the delivery of his statement shows that Kavanaugh does not have the strength or “temperament” to serve on the high court.

Kavanaugh goes full Trump in his opening: angry, partisan, confrontational, conspiratorial, self-pitying. Worked for the president. But is this appropriate for a judge?

Kavanaugh now crying pity-tears for himself.

Every American woman knows a guy like screaming red faced #Kavanaugh and we know damn well his lies. ALL THE MEN SHOULD BE CRYING BECAUSE YOUR TIME IS UP

Boss baby Trump isnt going to like you showing that weakness by crying, Kavanaugh. That soft ass, Liberal emotion may actually finally get your nomination withdrawn. #kavanaughhearings

This red-faced, petulant, belligerent rant against “left wing opposition” isn’t exactly helping Kavanaugh’s case. Sounds like a spoiled brat crying over not being treated specially enough. Isn’t he supposed to be wise, stately, and venerable?? #KavanaughHearings

Kavanaugh is crying because of how unfair this has been to him.

Don’t talk to me about how women are so emotional.

Christine Blasey Ford held it together while talking about the worst night of her life. He couldn’t make it five minutes.

Listening in my car and wondering: is Kavanaugh fake crying or sniffing the same substance as @realDonaldTrump? #cancelkavanaughnow #KavanaughHearings #IbelieveChristineBlaseyFord

brett kavanaugh just went from screaming at the top of his lungs to crying to back to yelling and i’m supposed to believe this rapist is going to be a calm and collected judge???

Holy shit, Kavanaugh is melting like The Wicked Witch Of The West!! #KanavaughHearings

Brett Kavanaugh broke down crying when he talked about having to lie to his young daughter about trying to rape a girl barely older than she is now.

I believe Dr. Ford, and I believe Kavanaugh’s crying because his past finally caught up with him and deep down, he knows it.

I understand this is tough, but this angry to crying to at points rambling statement is really not helping Kavanaugh’s case. But he’s performing for Trump. This is abundantly clear. But it’s also making him look unhinged.

You can almost see Kavanaugh realize he’s gotten too angry so he should probably start fake-crying about his dad.

Cry me a river Kavanaugh.

That Ford held it together better than Kavanaugh is a staggering marvel.

A death rattle of angry, entitled masculinity. Nothing but indignant and sentimental self-regard. Is he going to explain, at any point, what her motive is meant to be? #KavanaughHearings

I wonder how it would be received if a woman raged and cried before lawmakers the way Kavanaugh is doing right now.

Brett Kavanaugh is far too emotional to be a Supreme Court justice. https://t.co/sVlboOyqka

It #kavanaugh is confirmed after this temper tantrum, I hope the women on the court use his partisan vitriol to force him to recuse himself as much as possible. All kinds of bias and conflict of interest have been revealed.

Brett Kavanaugh sounds quite enraged. Tears are a bit dramatic. Is this job worth hanging on too so badly?

kavanaugh testimony is a good reminder to stay hydrated you guys!

Like with the Fox interview, Kavanaugh’s just playing to the base here, maybe betting that it will then put pressure on GOP senators to confirm him. Which says something about his temperamental fitness for the Court.

I wonder if Kavanaugh realizes some selectively-remembered details about his summer in no way disprove Dr. Ford’s testimony pic.twitter.com/w3INjA1ZA6

Which rich white privileged white man put on a better show for the cameras in the last week: Mark Cuban or Brett Kavanaugh?

Kavanaugh is crying at weird times during this opening remarks… also, he just said “I like beer, I still like beer.” #KavanaughHearings

#Kavanaugh is really an unpleasant pathologically ambitious piece of work.