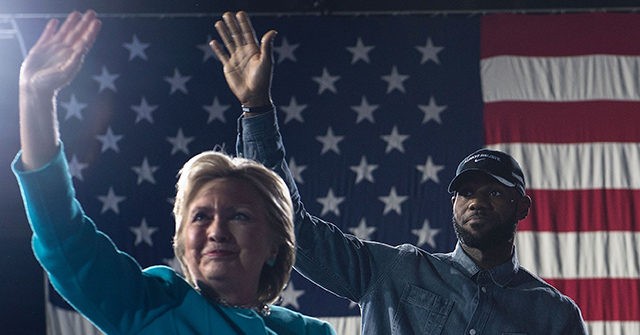 Los Angeles Lakers star LeBron James said Tuesday that he will no longer comment on the ongoing China-NBA scandal following the backlash he received for criticizing a general manager’s support for Hong Kong’s pro-democracy movement.

“I’d be cheating my teammates by continuing to harp on something that won’t benefit us trying to win a championship because that’s what we’re here for,” James told reporters. “We’re not politicians. It’s a huge political thing. But we are leaders, and we can step up at a times, but you don’t feel like you should upon things you shouldn’t have to.”

“I talked about it yesterday…I’m talking about it now but I’m not talking about it again.” @KingJames discusses shifting the preseason focus to the #Lakers winning a championship. pic.twitter.com/7KUfgzroCM

“There’s things that happen in my own community, trying to help my kids graduate high school and go off to college,” he added. “Trying to make sure the inner-city kids that grew up in my hometown can have a brighter future and look at me as inspiration to get out of the hellhole of the inner city. And we don’t talk about those stories enough.”

On Monday, James said he believes Houston Rockets general manager Daryl Morey “was either misinformed or not really educated on the situation” regarding the potential consequences of his actions when he tweeted in support of Hong Kong’s pro-democracy protests.

“Yes, we do have freedom of speech,” James said. “But at times, there are ramifications for the negative that can happen when you’re not thinking about others, when you only think about yourself. I don’t want to get into a word or sentence feud with Daryl Morey, but I believe he wasn’t educated on the situation at hand, and he spoke. So many people could have been harmed, not only financially but physically, emotionally, spiritually. So just be careful what we tweet and what we say and what we do. Even though yes, we do have freedom of speech, it can be a lot of negative that comes with it.”

When asked to clarify his thoughts, James went further.

“I believe (Morey) was either misinformed or not really educated on the situation, and if he was, then so be it,” James said. “But I have no idea. That’s just my belief. When you say things or do things, you’re doing it and you know the people that can be affected by it, and the families and the individuals and everyone that can be affected by it. Sometimes things can be challenging as well. Also sometimes, social media is not always the proper way to go about things as well. But that’s just my belief.”

In Hong Kong, protesters burned and stomped on James jerseys during a rally Tuesday at the Southorn Playground. They threw basketballs at a photo of James and chanted support for Morey and criticism about James’ comments.

The comments also set off swift reaction on social media, with many listeners perceiving James’ remarks as criticism of the democracy movement in Hong Kong. James addressed the issue again in two tweets before the Lakers’ preseason game against Golden State at Staples Center.

“Let me clear up the confusion,” James tweeted. “I do not believe there was any consideration for the consequences and ramifications of the tweet. I’m not discussing the substance. Others can talk about that… My team and this league just went through a difficult week. I think people need to understand what a tweet or statement can do to others. And I believe nobody stopped and considered what would happen. Could have waited a week to send it.”

Let me clear up the confusion. I do not believe there was any consideration for the consequences and ramifications of the tweet. I’m not discussing the substance. Others can talk About that.

My team and this league just went through a difficult week. I think people need to understand what a tweet or statement can do to others. And I believe nobody stopped and considered what would happen. Could have waited a week to send it.

Among the critics of James’ comments Monday night was Sen. Rick Scott (R-FL). The former Florida governor, who has been critical of James in the past dating back to his decision to leave the Miami Heat in 2014, posted on Twitter that James “is the one who isn’t educated on the situation at hand. It’s sad to see him join the chorus kowtowing to Communist China & putting profits over human rights.”

“Having just been in Hong Kong – on the streets & with the protestors – this kind of garbage is hard to take. LeBron, are YOU educated on “the situation”? Why don’t you go to Hong Kong? Why don’t you meet the people there risking their lives for their most basic liberties,” Hawley wrote on Twitter.

“This statement is unbelievable. “So many people could have been harmed”? By Daryl Morey daring to express sympathy for democracy? News flash: people ARE being harmed – shot, beaten, gassed – right now in Hong Kong. By China. By the Communist Party the NBA is so eager to appease,” the lawmaker added.