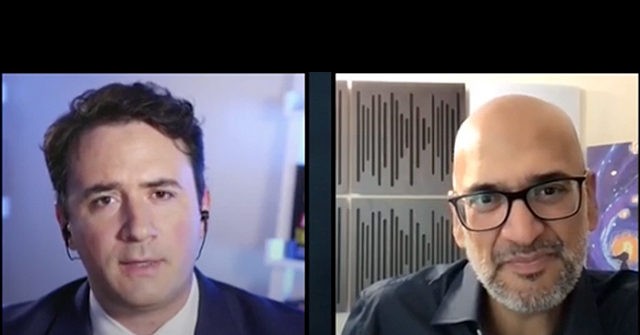 The following content is sponsored by the Palm Beach Letter.

Cryptocurrencies may be essential sanctuaries providing refuge from politically-driven financial blacklisting. Breitbart News Editor-in-Chief Alex Marlow discussed the potential of blockchain technology to provide a shelter from such exclusions with crypto investment expert Teeka Tiwari, whose PickoftheDecade.com presentation and Palm Beach Letter provide investors with information and tools to understand and engage with this emerging asset class.

Marlow asked about cryptocurrencies as “a hedge against financial blacklisting” by “woke corporations” that are “cracking down on people who have viewpoints that they don’t like.”

Cryptocurrencies will become decentralized alternatives to dominant payment processors like Mastercard and Visa, Tiwari assessed. He warned of the payment processing industry’s concentration of ownership and oligopolistic status quo as a threat to those publicly expressing viewpoints contrary to orthodoxies held by financial service giants.

Tiwari stated, “If you are someone who espouses an unpopular point of view, and you rely on a subscription model or something of that basis, you should be very, very worried, because if you look at our current financial system — in terms of payment — it’s really dominated by Mastercard and Visa.”

He considered, “If Mastercard and Visa say, ‘We’re not going to process any payments for you,’ what do you do?” You’re just out of luck. You cannot operate your business, and then to take it a step further, if AWS says, ‘We find your point of view abhorrent,’ or, ‘We don’t like it,’ and they don’t let you use that network, guess what? You’re banned from the internet, essentially.

“These are big problems that the crypto world is attempting to solve,” he said. “Now, we’re not there yet, but we will be in a few years.”

Tiwari noted that cryptocurrencies are still nascent assets, meaning fears of it being “too late” to see returns on investments in Bitcoin, for example, are misguided.  Cryptocurrency’s increasing use will drive increased valuations of certain cryptocurrencies, as he’s predicted at PickoftheDecade.com

He explained, “If you look at the adoption of Bitcoin as an asset, about 200 million people are involved in Bitcoin or using Bitcoin, and that’s about the same amount of people that we had in internet users in the mid-00s. So was it too late to get involved in the internet in the mid-90s? Well, it felt like that because some of those stocks that had huge moves, but no, it wasn’t.”

In his Palm Beach Letter Tiwari advised investors to consider Bitcoin as a “blue chip” cryptocurrency with capacity for increased valuation via the expansion of cryptocurrency use. He invited people to “look at the adoption curve” of Bitcoin.

He urged investors to ask, “[If] 200 million people are using it now, by the end of the decade, how many people do we think are going to be using Bitcoin or actively involved in the Bitcoin ecosystem? According to multiple sources of research, the number is in the billions of people that will be using Bitcoin.”

Cryptocurrencies may have the capacity to protect investors from devaluation of assets resulting from political corruption, Tiwari held.

“[Cryptocurrency] is a way of opting out of this fiat bubble that we are in, right now,” Tiwari explained. “Every traditional asset is in some way, shape, or form, dictated to and manipulated by either a central monetary authority — like the Federal Reserve — or by economic policy as espoused by whatever government happens to be in place, or whatever political party happens to be in power, and that can feel very paralyzing.”

Varying engineers are developing blockchain-based platforms and technologies to expand alternatives to conventional currencies and internet-hosting services, Tiwari shared. As the number of people investing in cryptocurrency expands, he predicted, so will options for its use in payments for goods and services.

He concluded, “That cake is not baked, yet. But I know the people that are baking it, and they’re making that infrastructure and it will absolutely be in place over the next several years.”

Anyone interested in learning more about — and benefiting from — cryptocurrency’s revolutionary impacts on the financial system should watch Tiwari’s PickoftheDecade.com presentation.

Sign up to receive a full 12-month subscription to Teeka Tiwari’s Palm Beach Letter HERE. Do your own homework and watch his presentation now at PickoftheDecade.com.