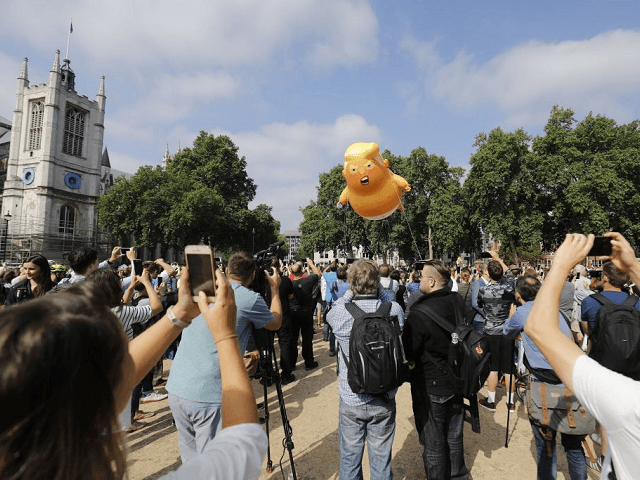 Leaked emails appear to show the London Mayor Sadiq Khan may have backed and pushed to reverse a decision to block a caricature balloon of U.S. President Donald J. Trump from flying over Westminster.

The emails, seen by the Guido Fawkes Westminster political gossip blog, claim three of Mr Khan’s Mayoral Directors and closest advisers intervened to “make it happen” after the Greater London Authority (GLA) turned down the request in a “final” decision.

The London Mayor, however, publicly claimed he “was not involved in the decision at all” and allowing the “blimp” to fly, just metres about Parliament Square, was a procedural rather than political matter.

David Kurten, a UKIP representative in the London Assembly, told Breitbart London he was considering questioning the Mayor about the issue because of the new evidence, which could show Mr Khan is “personally responsible” for damaging London’s reputation in the U.S.

On the July 10, Mr Khan said on national television that “no” he did not “personally approve” the balloon but “supported” the GLA in their decision to allow for it to fly, implying the choice was completely separate from his office.

However, in April, GLA Facilities Management are claimed to have emailed the people behind the balloon protest to tell them that “we cannot consider the inflatable request below and the decision is final”, according to screenshots of emails on the Guido Fawkes blog.

A campaign was quickly started, with an article appearing in the Guardian headlined: “Come on, Sadiq Khan, let our Trump Baby blimp fly above London.”

The Mayoral Director Leah Kreitzman is then alleged to have sent an email on June 27, stating: “I think we might need to lean into it a bit more now. Can you please draft something along the lines of us looking at how we can make it happen.”

The Mayor’s team then briefed the Evening Standard that the balloon could be allowed to fly, and the following day, the City Operations Lead in Mr Khan’s office apparently sent an email saying they were “minded to grant permission”.

A week later, the anti-Trump protestors were informed they would be allowed to fly the balloon outside the Houses of Parliament as the President visited the UK.

But two days later, on July 6, the Mayor claimed: “I was not involved in the decision at all. It was made by the city operations team at the GLA.”

He added: “I did not have a role in this decision. It was a decision for the city operations team at the GLA.”

Mr Kurten blasted: “The blimp of President Trump which flew over Central London was a disgraceful insult to both the President and the United States as a whole.

“Mayor Sadiq Khan has always said that it was not his decision to make and that he did not have the power to stop it from flying.

“The new evidence that three of his closest advisers leant on Greater London Authority staff and overruled their original decision, means that they were actively involved in the decision process.

“If it transpires that Sadiq Khan was behind this, then he is personally responsible for the damage that has been done to the reputation of London and the United Kingdom by pushing for such a gross and grotesque spectacle to fly outside Parliament.”