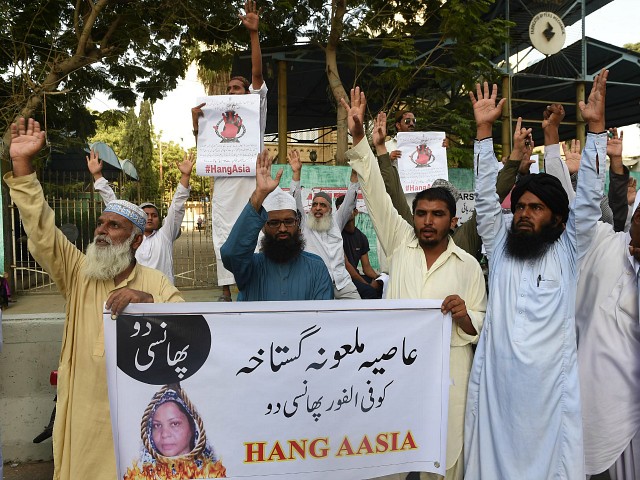 The lawyer of the Christian woman Asia Bibi, recently acquitted in Pakistan of a 2010 death penalty verdict for alleged blasphemy, reportedly revealed this week that he is appealing to Germany to grant her whole family citizenship to flee death threats by Islamists.

In Frankfurt, Saiful Mulook, the lawyer who escaped Pakistan after the acquittal fearing for his life, told reporters Tuesday that Asia Bibi and her family need a passport to leave the country, Dawn reported.

“The whole world is asking why she’s not coming,” Mulook told reporters, adding, “The answer is first that to leave a country you need a visa or you require a passport of another country.”

“If the German chancellor directs her ambassador to give a passport to her, her husband and her two daughters conferring German nationality, nobody can stop her for one second,” he also said, regretting that, so far, no government had come forward to support her in such an open and free manner.

Dawn acknowledged, “It was unclear why citizenship, rather than a visa, was necessary for her to leave Pakistan, though Mr Mulook said pressure from religious extremists was making it harder for Islamabad to arrange her departure. She and her family are reportedly staying at a safe house in Pakistan despite offers of asylum from countries, including Canada.”

Although the judges cleared Bibi and ordered her release on October 31, Islamabad is holding her in an undisclosed location while the court reviews petitions challenging the acquittal under a deal reached by the Pakistani government to stop the protests orchestrated by the anti-blasphemy Islamist Tehreek-e-Labaik Pakistan (TLP) party soon after the court overturned the Christian mother’s conviction.

The Khan administration also agreed not to block a TLP petition to add Bibi to a no-fly list. TLP has threatened to kill Bibi, her lawyer, and judges who cleared her.

“The review petition is with the Supreme Court and all of us should wait for the final verdict instead of resorting to violence on the roads,” the minister declared, Dawn noted.

According to the Dawn, “German officials have said that they and a number of other countries are in talks with Bibi’s family and the Pakistani government to find a way of rehousing her … The German government did not immediately respond to requests for comment on the lawyer’s assertion that Bibi needs a passport to leave.”