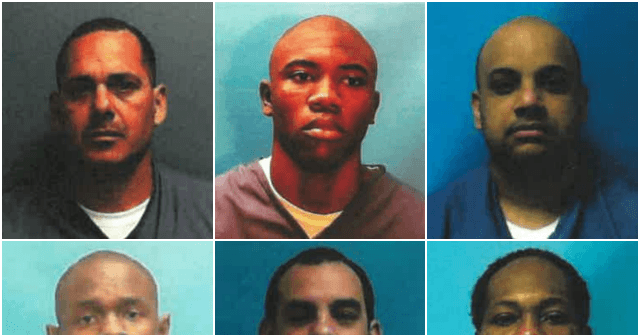 Illegal alien convicts are being released, or have already been released, directly into American communities from state prisons thanks to President Joe Biden’s “sanctuary country” orders that are preventing most arrests and deportations, a lawsuit reveals.

In February, Biden’s Department of Homeland Security (DHS) issued orders that instruct Immigration and Customs Enforcement (ICE) agents not to pursue illegal aliens for arrest and deportation unless they have been recently convicted of aggravated felonies against Americans.

For example, illegal aliens arrested or charged with rape, murder, sexual abuse of a child, and child pornography would not be eligible for arrest by ICE agents because they have not been convicted of the crimes.

Florida Attorney General Ashley Moody filed a lawsuit against the Biden administration’s sanctuary country orders, revealing that already illegal alien convicts in state prisons are being released into American communities because ICE agents can no longer detain and deport them.

Moody named seven illegal alien convicts in the case — many of whom have been convicted of burglary, cocaine trafficking, grand theft auto, heroin trafficking, credit card fraud, money laundering, and other crimes.

The cases can be viewed in full here:

Despite notices by the Florida Department of Corrections to ICE about the illegal alien convicts’ upcoming releases, ICE agents were forced to reply saying they would be unable to take custody because of Biden’s sanctuary orders.

As a result, illegal alien convicts Alejandro Falcon Luis Reyes and Dzevad Husejnovic have already been released into Florida communities rather than being turned over to ICE agents for detainment and deportation.

Other illegal alien convicts named in the lawsuit — including Jose Gomez, Loveson Pierre, Donavan Mott, and Wanto Jerome — are set to be released into communities this month, June, or November.

“The Biden administration’s reckless policy of refusing to do their jobs and deport criminals places all those gains and Floridians’ public safety at risk,” Moody said in a statement.

“Until President Biden’s inauguration, presidents of both parties detained and deported criminals,” Moody continued. “This is a radical shift that places Floridians and our law enforcement officers in greater danger, and that is why I filed suit.”

In Pasco County, Florida, alone, the lawsuit states that ICE agents have been unable to take custody of three illegal aliens who were convicted of crimes such as domestic violence, violating a restraining order, and a warrant for an accused sexual predator.

Moody, in asking for a preliminary injunction on Biden’s sanctuary country orders, joins Arizona and Montana Attorneys General Mark Brnovich and Austin Knudsen, who are also suing Biden, arguing that the policies are a violation of federal immigration law.

As Breitbart News reported this week, Biden’s sanctuary country orders have prompted ICE detention of illegal aliens to hit the lowest level in the agency’s history with less than 14,000 detainees in custody. Likewise, deportations have been cut by 53 percent in his first month.

The lawsuit was filed in U.S. District Court for the Middle District of Florida. The case number is 8:21-cv-00541.