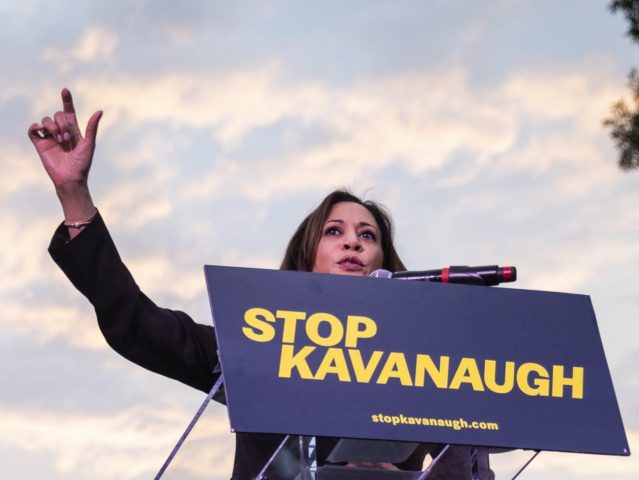 Law students around the country are skipping class this week to protest Brett Kavanaugh’s confirmation to the Supreme Court.

Law students around the country are in the middle of a three-day walkout protest over Brett Kavanaugh’s confirmation to the Supreme Court of the United States. Starting on Wednesday, students at law schools around the country walked out of their classrooms at 2:15 p.m. with the intention of returning on Monday morning. The students believe their protest will encourage congressional candidates to announce their commitment to impeaching recently confirmed Supreme Court Justice Brett Kavanaugh.

In an open letter on the StrikeAgainstKavanaugh.com, student organizers say that they don’t believe Brett Kavanaugh is a “legitimate” Supreme Court justice. The letter makes an unusual tie-in to America’s history of brutality against Native Americans.

We are in the middle of a national emergency. Brett Kavanaugh has been confirmed to the Supreme Court. We cannot accept a system that empowers a man who repeatedly lied under oath and a judiciary review process that only performs a sham of an investigation into his misconduct. We do not recognize Kavanaugh as a legitimate member of the United States Supreme Court.

As we announce this strike on Indigenous Peoples’ Day, we recognize the ongoing harm indigenous people have suffered under the American legal system. The United States was borne out of conquest of indigenous people by European colonizers whose descendants became this country’s founders. Since the Supreme Court’s first case involving indigenous rights, the Court has heard hundreds of cases and it has been grossly unjust to indigenous plaintiffs and defendants. Later this term, the Court   could curtail the hunting rights of the Crow Tribes, rights which are “central to [the] Tribes’ subsistence, economy, culture, spiritual life, and day-to-day existence.” We do not believe that Kavanaugh will be a champion for indigenous peoples’ rights, and fear the worst for the indigenous communities who have already faced so much harm from the Court.

A local news report from Wednesday revealed that students at Ohio State University’s law school walked out of their classrooms at 11:10 a.m. to protest Kavanaugh’s confirmation. Students told reporters that they believed that Dr. Ford’s allegations were not taken seriously by members of Congress. Some said that they participated in the protest to bring attention to the ever-present issue of sexual assault.