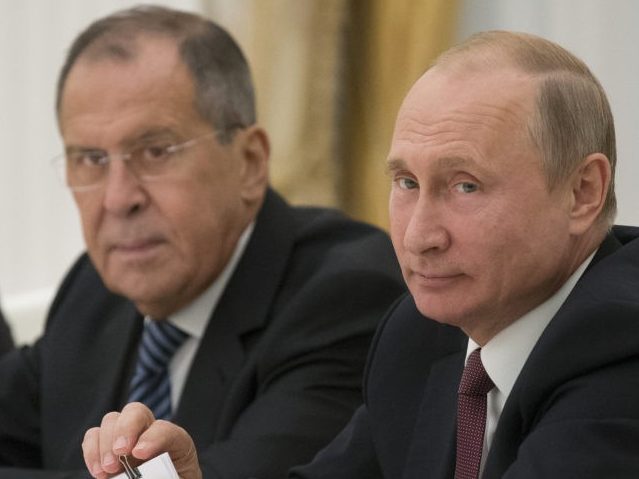 Russian Foreign Minister Sergey Lavrov told the U.N. General Assembly on Friday that Russia desires a multilateral world of peace and respectful negotiation, but its aspirations are thwarted by the heavy-handed tactics of the United States, which is clinging to its global hyperpower status with a white-knuckled grip.

He took care to mention America by name only a few times but went out of his way to make it clear which nation he was criticizing.

Lavrov sneered at the “desire of several Western states to retain their self-proclaimed status of world leaders” with methods such as “political blackmail, economic pressure, and brute force.”

In Lavrov’s telling, Russia is a lonely force standing up to the global bully he couldn’t quite bring himself to name:

We observe the offensive of belligerent revisionism against the modern system of international law. The attacks have been launched against the basic principles of the Middle East settlement, the Joint Comprehensive Plan of Action on the Iranian nuclear program, the commitments within the World Trade Organization framework, the multilateral climate agreement, and many more.

Lavrov dismissed allegations of Russian interference in the recent elections of a certain other major global power as “baseless” charges “made simultaneously with overt endeavors to undermine and topple democratically elected governments.”

The Russian foreign minister eventually got around to listing the “more than half-a-century-long U.S. blockade of Cuba,” the U.S. invasion of Iraq in 2003, and U.S. intervention in Libya in 2011 as the kind of “unilateral extraterritorial restriction” that makes constructive multilateralism impossible.

He was especially furious about the Trump administration’s actions in Syria, “against whose territory missile strikes were launched under a totally trumped-up pretext on April 14, 2018, a few hours before international inspectors were expected to arrive at the site of the staged incident.” (Russia and Syrian dictator Bashar Assad claim chemical attacks blamed on the Assad regime were actually staged productions designed to justify Western intervention).

“The failed attempt of a regime change orchestrated from the outside and relying on the extremists has almost resulted in a disintegration of the country and emergence of a terrorist caliphate instead,” Lavrov thundered, alluding to the Islamic State.

He also made passing mention of the civil war in Yemen and the “Palestinian problem,” where he decried “unilateral approaches and attempts to monopolize the settlement process.”

After some meandering complaints about Nazis, Lavrov zeroed in on Ukraine as ground zero for the return of fascism: “The growth of radical nationalism and neo-fascism in Ukraine – where criminals who fought under the SS banners have been declared heroes – is one of the main factors in the protracted intra-Ukrainian conflict.”

He accused the government in Kiev of reneging on international agreements and “cherishing the delusions that it might be able to bring occupying forces to Donbass with the support of the West.”

“Those who patronize the present Kiev authorities must bring their charges to their senses and make them lift the blockade of Donbass and stop the discrimination of ethnic minorities across Ukraine,” he demanded.

Russia’s annexation of Crimea was justified as an intervention to protect ethnic Russians from persecution by the Ukrainians. Donbass is another region of Ukraine that Russia would like to “protect” in the same way.

Lavrov complained at length about Western efforts to draw Eastern Europe into NATO, then sweetened his sour speech a little by praising diplomatic developments on the Korean peninsula.

Alas, he ended this happy moment by warning the United States jeopardized Korean denuclearization by pulling out of the Iran nuclear deal and sending the Organization for the Prohibition of Chemical Weapons into Syria to investigate all those “staged” chemical weapons attacks.

“We should recall the art of negotiation in order to be worthy of their legacy,” Lavrov urged. “Numerous problems of the modern time can be resolved only on the basis of equality and mutual respect. Dictate and coercion, so typical of the colonial era, are to be once and for all sent to the archive, and even better left on the ash heap of history.”